Knowing where to find the Crucible Axe Set in Elden Ring is important if you are planning on playing a tanky defensive build. This heavy armour, which you might know as Crucible Knight Armor, comes with superior Physical, Magical, and Holy damage negation. It also boasts superb Immunity and Robustness stats. This makes the armour great for any melee builds with a focus on Strength, as it will allow you to sustain quite a lot of damage while landing blows with heavy weapons. Read on to learn how to get the Elden Ring Crucible Axe Armor Set. 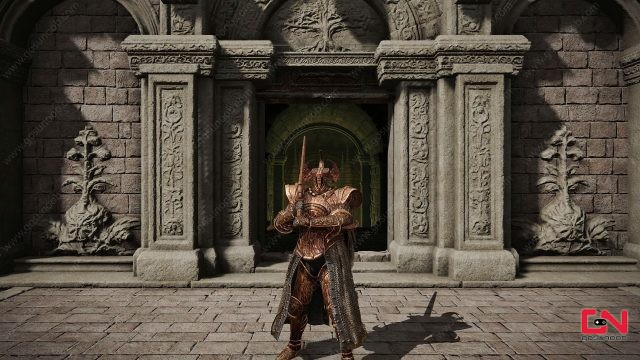 How to Get Crucible Axe Armor Set in Elden Ring

In order to find the Elden Ring Crucible Axe Armor Set, you’ll need to go to the Auriza Hero’s Grave. And there you will need to kill Crucible Knight Ordovis who will drop the Crucible Axe Armor Set. The Auriza Hero’s Grave is a minor sub-area in the Capital Outskirts region in the Western zone of the Altus Plateau. To find Auriza Hero’s Grave, go to the eastern-most section of Leyndel’s inner walls. Eventually, you’ll spot a detached tomb-like building between the walls and cliffs in the open area. Check out our screenshots below for the exact location and the appearance of the building.

Once inside, stand exactly in the centre of the area surrounds by pillars, and that will trigger a lift that will bring you down to the Auriza Hero’s Grave. Once down, activate the site of grace there, and follow the path to the left. Now you’re entering the area you might already be familiar with if you’ve visited the Stranded Graveyard before. You’ll need to descend all the way down to get the Crucible Axe Armor Set, but in that process, you need to avoid massive mechanical war chariots patrolling the passage up and down. They are really fast and cover the whole path side-to-side. To avoid them, use alcoves but beware of the skeletons.