Finding the Eclipse Shotel location in Elden Ring is something you won’t be able to do in the early game as this powerful curved sword is hidden deep into a late-game zone. Still, it’s a legendary weapon well worth acquiring due to its strong stats and unique skill – Death Flare. By using this ability the Eclipse Shotel will become embued in the flames of the Prince of Death himself. This will grant you a powerful explosive attack that inflicts the “Death” status effect on its targets. If you want to wield the eclipsed sun enhanced by death itself, here’s where to find the Eclipse Shotel in Elden Ring. 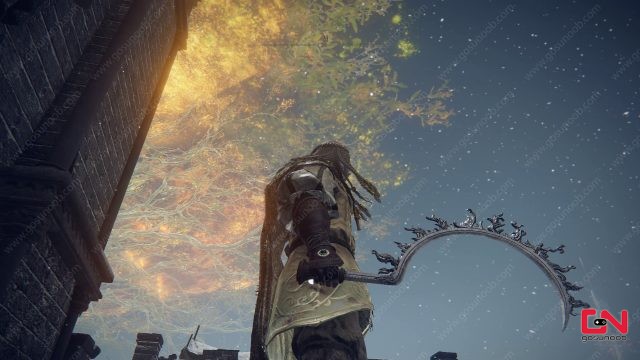 How to Get Eclipse Shotel in Elden Ring

In order to find the Eclipse Shotel, you’ll need to travel to Castle Sol in the Mountaintops of the Giants. This is really late into the game, as first, you’ll need to visit Leyndell, the Capital City, in order to get access to the mountaintops. The castle itself is located in the northern parts of this region. You can see the exact location of Castle Sol in our screenshot below. It goes without saying, but beware of the enemies inside, as this is not an easy dungeon.

Once you reach the Castle Sol Main Gate site of grace, enter through the main gate and head straight to the other side of the court. Climb a flight of stairs there to a wooden landing and continue left. From there, go all the way down the path to the other side and enter a wall tower with torches on both sides. Climb the stairs inside, and now we’re really close to getting the Eclipse Shotel.

Once you step outside the tower upon climbing the stairs, head straight to the church on the other side. That’s where we’ll find the Eclipse Shotel. Climb the stairs and enter the chapel. Watch out for the shield-wielding knight atop the stairs. Approach the altar inside the church, interact with the body, and you’ll get the Eclipse Shotel!