Like with many other major NPCs in Elden Ring, Iron Fist Alexander’s questline includes an intricate series of subquests across the world of the Lands Between. You will first meet Alexander in Northern Stormhill and his questline will span the entire duration of the game. Such a complex questline may cause some buggy situations. And since Elden Ring patch 1.3, a number of characters start acting strangely, particularly in Radahn’s Arena. If Alexander is not leaving Radahn’s Arena and you are unable to progress this quest, here’s how to fix this bug. 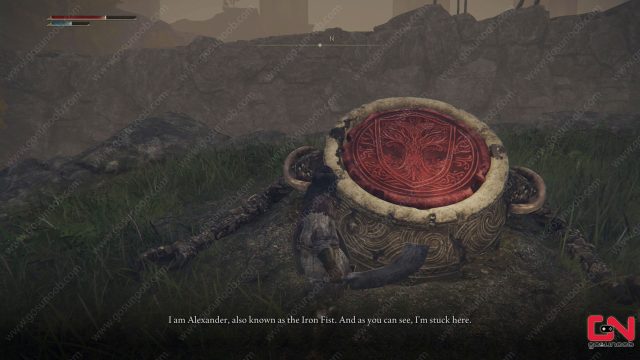 As one of many steps during the Alexander questline, he will be joining you in Redmane Castle. Even if you didn’t interact with him prior to this, he will appear at the festival anyway. There, you will be able to summon him in Radahn’s arena to help you in this boss fight. And here is where the problem starts for many players. The next location he is supposed to spawn is in Liurnia of the Lakes, south of the Artist’s Shack Site of Grace. He will be stuck again. When you use Oil Pot or Roped Oil Pot to free him, he should move to Mt. Gelmir.

But instead of moving to his new location near the Seethewater Terminus Site of Grace, he instead returns to Radahn. What you need to do is to exhaust Alexander’s dialogue options at Starscourge Radahn’s Site of Grace. One dialogue is not enough, as he will have more to tell you. Another very important thing is to finish the Jar Bairn quest, which is tied to Alexander.

For Alexander to show up at Mt. Gelmir, it is also suggested that you first need to kill a Magma Wyrm near the Seethewater Terminus Site of Grace. Only after killing it, Alexander should appear at a lava lake south of Fort Laiedd. Finally, for the Fire Giant boss. Alexander’s summon sign emerges inside the Fire Giant arena. Enter the boss fog from the northern chain and you will spot the gold summon sign near the entrance. If nothing of these helps with the issue, then, unfortunately, New Game Plus might be the only way for you to complete this quest.