Elden Ring is teeming with unique gear and legendary armaments for players to experiment and bolster their combat stats. It seems that the meta constantly shifts and players are continuously reinventing new combinations and optimal builds. Recently, the Jellyfish Shield has become a particularly popular piece of equipment. This unique great shield comes with solid defensive stats but its true power lies in its unique ability. The skill, called Contagious Fury, significantly raises your attack power for a certain duration. Having a 20% damage bonus for 30 seconds from your shield is a powerful ability, and that’s why the shield has grown in popularity. Here’s where to find Jellyfish Shield in Elden Ring. 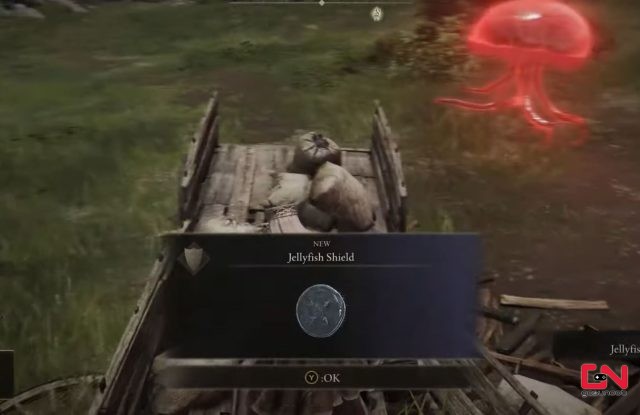 How to Get Jellyfish Shield in Elden Ring

You can find the Jellyfish Shield in the Liurnia of the Lakes region, north of Limgrave. This is the second major region in the game, and by now you’ve probably already unlocked it. Once you are in Liurnia of the Lakes, head to the westernmost area of the region. There is the main path coming from the southern parts of Liurnia of the Lakes in leads further to the west. Just follow this path until you reach the Foot of the Four Belfries Site of Lost Grace. Check out the map below for the exact location.

Once you reach the Foot of the Four Belfries Site of Lost Grace, head directly north and soon you’ll encounter a group of four red Jellyfish roaming around a broken wagon. The Jellyfish Shield is inside the wagon. You can either defeat the Jellyfish, or you can grab the shield immediately and run from there. And that’s it now you have this powerful shield! Like all other gear with unique abilities, it can not be infused with Ashes of War, but you can buff it with spells and various consumables. Aside from its phenomenal ability, it also boasts a 100% physical block rate. All in all, a great piece of gear you’ll find quite useful in various builds. If you are having trouble reaching this location, check out our video!

NEXT POSTKirby and the Forgotten Land Release Time & Date