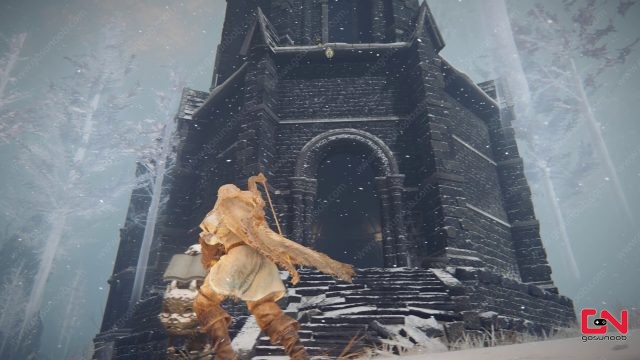 The solution itself is rather straightforward, but the execution will be the real issue. In order to break the seal on the Heretical Rise entrance, first, you need to spawn at the Freezing Lake Site of Grace. From there, head southwest along the rocks until you reach an arch-shaped ruin. Check the images below for directions to the ruins. In the second screenshot, you can also see the appearance of the ruins.

Once you reach the arch, climb on top of it and you’ll see that those are remains of what was once a bridge leading across the gorge towards the Heretical Rise. Reach the edge of the ravine where the collapsed bridge once stood. Now, don’t be afraid and step forward. You won’t fall down, instead, you’ll stride across the invisible viaduct. That bridge is a solution to the “Falling Snow Marks Something Unseen” message and the Heretical Rise puzzle.

Now comes the hard part. You need to tread lightly and watch your step. A wrong move will end up in your untimely death. The invisible path goes straight for around two-thirds and then turns left and up to reach the balcony with a broken railing. That’s our entry point to the Heretical Rise. There are a couple of strategies how to check if there is a path or not. Some players use sorceries, like Swift Glintstone Shard, to check the path in front of them. You can also drop items like Rainbow Stones to check if they will fall or float (indicating that you can step there). Finally, the good old bow and arrows will also do the trick. If they bounce off the air, that means that there is a path there.

When you step on the balcony, the front door seal will immediately fall. So you don’t need to use the invisible path anymore, you can leave the tower normally. Inside the tower, you’ll have to beat a couple of enemies and grab some loot, including the Founding Rain of Stars at the top.