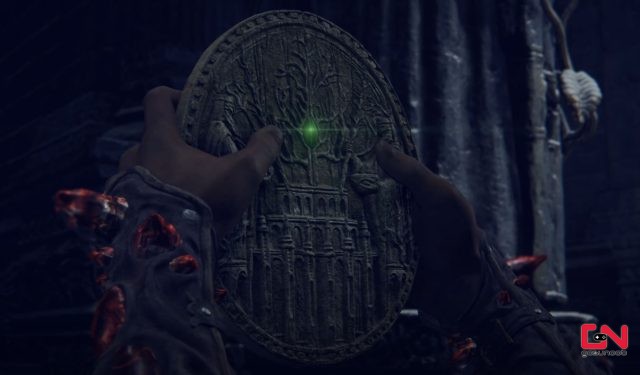 Left and Right half of the Haligtree Medallion Elden Ring

How to get to the Haligtree in Elden Ring

To get to the land of Miquella’s Haligtree you’ll first need to find the Grand Lift of Rold. And in order to reach the Grand Lift of Rold, the first thing you will need to do is to access Leyndell, Royal Capital. As you might’ve guessed, this is one of the final areas of Elden Ring. Given that this is part of the end-game content, this guide might include some spoilers, so fair warning! The Grand Lift of Rold will grant you access to the Forbidden Lands. Inside, you’ll spot two statues of a bearded man with crossed staffs and bowls. Check out the image below for their appearance. Stand in a circle in front of them, and if you have two conjoined halves of the Haligtree Secret Medallion, select “Hoist Secret Medallion.”

A cutscene will ensue, and a secret passage will start opening. The Haligtree Medallion will start emitting green light, and the statues will react to it, as their eyes will turn green as well. They’ll move their crossed staffs and the whole platform will move up. Once the cutscene ends, just pass between the statues and go straight to the tunnel in front of you. On the other side of the tunnel, you’ll enter the “Hidden Path to the Haligtree” area. And that’s it, you’ve found Miquella’s Haligtree! Of course, in order to do that, you will need both halves of the Haligtree Medallion. Read on to learn where to find them.

To find the Haligtree Secret Medallion (left) location, you will need to go to Castle Sol. The Castle Sol in the Mountaintops of the Giants region. If you are not sure where’s that, check out the map below. The Freezing Lake site of grace is located near Castle Sol. You can access this area through the Ancient Snow Valley Ruins zone south of the castle. The castle is an extremely difficult dungeon, so make sore to embark on this foray fully prepared. What you will need to do is to complete the whole castle, and at one of the upper platforms you’ll find a boss which you will need to defeat. Upon defeating him, a passage behind him will open. Head there, and then enter the tower, head to the top, and there you will find the Haligtree Secret Medallion (left)!

To find the Haligtree Secret Medallion (right), head to the Village of the Albinaurics in the Liurnia of the Lakes region. The Village is located near the swamp area alongside the western shores of the lake. Check out our map below for the exact location. You’ll recognize the entrance to the Village of the Albinaurics by corpses hanging from tall poles, and the surrounding area will suddenly become suspiciously dark and foggy. Just follow the road with the hanging corpses and soon you’ll enter the village.

It is a relatively small area with not much to do there. Explore it and you’ll hear someone weeping. That man is an NPC named Albus. He is hiding, disguised as a pot, which you can see in our image below. Attack the pot to break the spell and Albus will appear. He’ll tell the sad story of his will people. Upon completing the dialogue he’ll give you the Haligtree Secret Medallion (right). And we are done! Shoutout to Games from Mars for the screenshots, and make sure to check out his video for more instructions.