Rya is a peculiar girl you’ll meet in Liurnia of the Lakes zone of Elden Ring and she asks you to retrieve the necklace that a thug made off with. As with so many other NPCs in the game there’s a questline you can follow after meeting Rya. As with so many quests in Elden Ring, things are rather unclear as to where you need to go and what to do. Only thing certain is that it will be an adventure and some precious item reward in the end. Rya’s questline will take you all the way to Volcano Manor and discover multiple mysteries. We’ll show you how to retrieve the necklace for Rya in Elden ring and continue her questline all the way to the end. 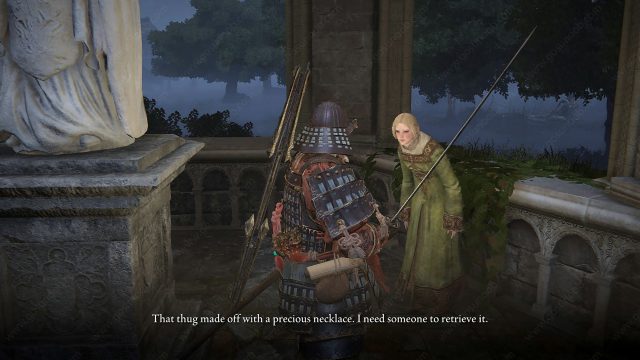 Rya is found close to where you enter Liurnia’s water covered lands. You’ll hear someone calling “Hello, hello” and see a girl in a nearby gazebo-like structure. Talking to her will reveal that her mistress sent her off on an errand. She was accosted by a ruffian and asks for your help to retrieve her necklace. Peculiar thing is that she warns you that the thug too is tarnished. This is an important piece of the information for further development of this quest line.

Talking to Rya a bit more reveals that the thug should be resting at an abandoned home down the way. Going a bit further north should lead you to a stone house called Boilprawn Shack. There’s a site of grace next to it. You’ll see another strange NPC next to it boiling some prawn. You have a choice to make here to talk to him and buy the necklace off of him or refuse. If you refuse then the only way to get the necklace is to kill him. Killing him drops the necklace along with some items. You also get his bell that you can take to Roundtable Hold. Give it to Twin Maiden Husks merchant there and then all stuff you could buy from him will be available at the Husks’ shop. 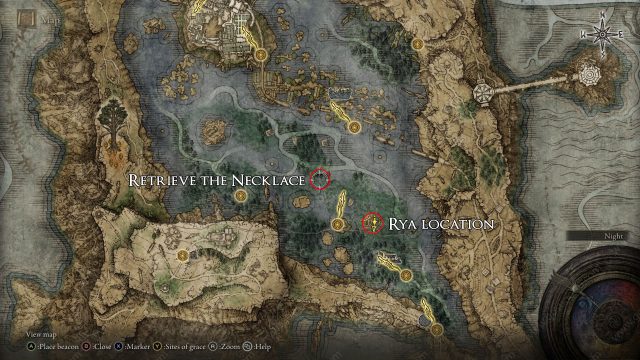 Also, killing tarnished may affect the ending of the game and your relationship with the Erdtree. Accepting his offer to buy the necklace will cost you 1000 runes. After purchase you can go back to Rya and seemingly the quest ends there. In one of my playthrough I did not get the necklace at all, nor kill the merchant and Rya still appeared in Volcano Manor.

Business with Rya does not end with retrieving the necklace. She tells you that she works for Lady Tanith in Volcano Manor and seeks stalwart Tarnished who might join their house. This is a questline that leads to joining the PvP covenant in Elden Ring. She gives you Volcano Manor Invitation and if you talk to her once more explains how to reach the Altus Plateau via Grand Lift of Dectus or using the cave next to it.

You can meet her again once you reach Volcano Manor. You have to speak to Lady Tanith and then accept her offer to join the fight against the Erdtree. This might have repercussions for the game’s ending if you follow the questline to the end. You have been warned! Once you get the key from Lady Tarnith then go to the locked room at the end of the hallway leading west. Open the last door on the left. Rya is in that room. Upon talking to her until exhausting all dialogue you have to pick up the two items on the table. You’ll get a task to dispose of Old Knight Ishtvan. 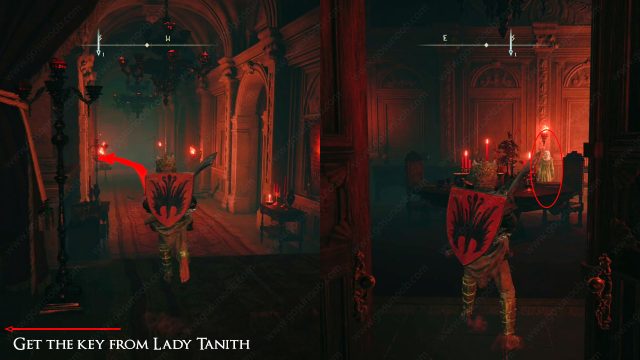 After you manage to defeat Old Knight Ishtvan go back to Volcano Manor. Talk to Lady Tanith to get your reward and go back to Rya. Talking to her will reveal that she hears strange noises in the manor. She hears something beyond the walls, like breathing, or slithering scales. If she does not say this then teleport back to Volcano Manor and talk to her again. Your goal now is to go to the first room to the right from Lady Tanith. There’s a painting in the far right corner where the corpse with parfumer bottle is at. While near the wall do a dodge roll. This should reveal a hidden passage. 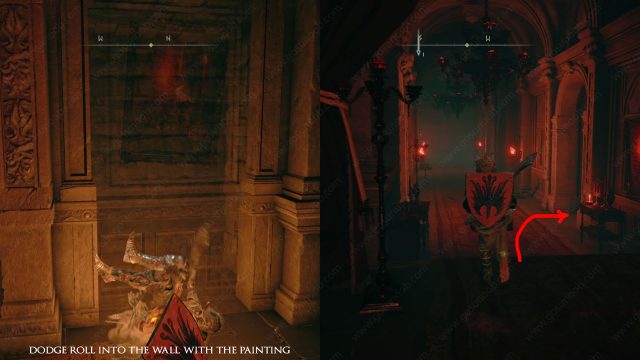 After disposing of poisonous slugs you’ll reach a room that leads to the basement. Before going down you should explore going through another door that leads out of the room with the cellar entrance. Follow the corridor disposing of slugs. At the very end, where you pick up Nomadic Cookbook [21], dodge roll into the wall on the left. This uncovers entrance into the only locked room in Volcano Manor. You’ll find legendary ashes Depraved Perfumer Carmaan inside.

Go back to the cellar and kill the tough enemy hiding there. Past him is the door that leads to Prison Town. This is another proper dungeon that leads to one of the major bosses in the game. Our current assumption is that Rya’s quest will reach its conclusion once you defeat this boss.

If you teleport back to Volcano Manor before exploring Prison Town you can visit the room to the far right of the western corridor. (opposite of where she was before.) You will reveal a surprising truth about Rya here. Feel free to talk to her and go back to talk to her mother. This will uncover more lore. It is obvious that Rya, now known as Zoraya, and her father’s bloodline have a lot to do with her predicament. Killing her father Rykard, Lord of Blasphemy and Serpent King may unlock further encounters with Zoraya, but we haven’t gotten there yet. If you know of how Rya’s destiny unfolds past this point please let us know in the comments.