The Blood Flame Blade is a very powerful Blood Incantation in Elden Ring. When you use it, you will envelop the armament in your right hand with a Bloodflame enchantment. This will cause your weapon to deal Hemorrhage damage. Since this is one of the most useful status effects in the game, you will definitely want to make use of it. Though, that requires that you find it first. We will explain both where you can find and how to use the Bloodflame Blade in Elden Ring. 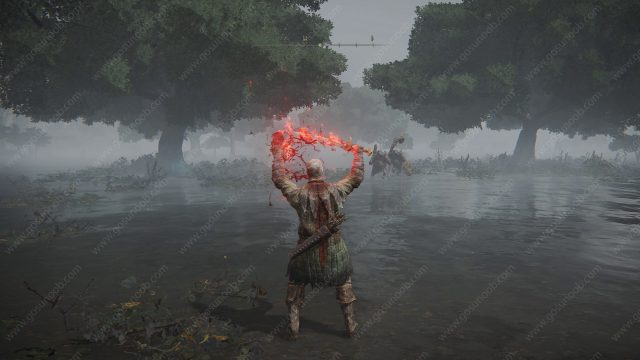 How To Get Bloodflame Blade in Elden Ring

To get this Blood Incantation, head to the Rose Church, which is n the Liurnia of the Lakes region. Once you arrive there, go a short distance northwest of the Church. We have marked the exact location in our screenshot gallery below. There, you will spot a Teardrop Scarab. You need to quickly kill it, so use your strongest attacks to take it down fast. Once you have done that, this Teardrop Scarab will drop the Bloodflame Blade Incantation.

How To Use Blood Flame Blade in Elden Ring

The Blood Flame Blade costs 10 Stamina to cast, and it requires 12 Faith and 10 Arcane. When used, it will enchant your right-hand armament with the Bloodflame effect. This buff lasts for an entire minute, so this should give you plenty of time to utilize it to great effect in combat. Another great thing about it is that this Bleed effect is stackable, so the more you attack, the greater the Hemorrhage Status Effect and its subsequent damage will be. While this means that you can give the Bleed property to weapons that otherwise don’t have it – which also allows you to take down certain bosses that are especially vulnerable to this, such as the infamous Fort Faroth Dragon – it’s best used on weapons that already have this property, like the Grave Scythe, Uchigatana, Moonveil, Winged Scythe, and other such armaments.