Are you receiving the Elden Ring “Inappropriate Activity Detected. Unable to Start in Online Mode” error message following the Colosseum 1.08 patch? The new free DLC for Elden Ring is here! The Colosseum update brings a brand new way to play PvP via the new arenas, featuring 1v1 duels and various team matches. However, some players were unpleasantly surprised after the update. They are allegedly banned even though they claim they have done nothing wrong. If you are one of these, read on as we explain why this happens and how to fix it. 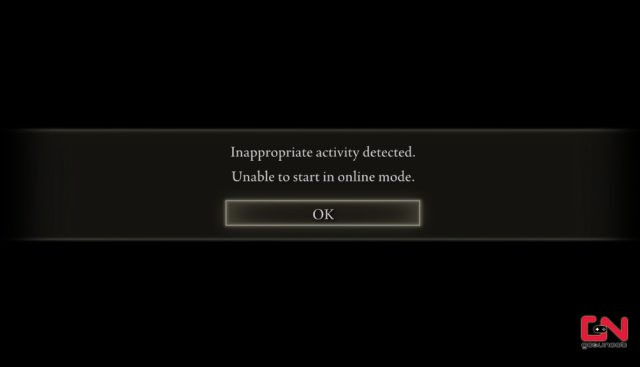 First things first, before we jump to the solution, a fair warning. The “Inappropriate Activity Detected” message means that you have been banned from any sort of online play due to illegal activities, which are punishable by a ban. If you’ve done any such activity, then there’s not much you can do here. This, obviously, includes using cheats and hacks. But also things like tempering with game files, using suspicious modes, having suspicious third-party apps enabled, and so on.

Even “just” using in-game exploits and abusing glitches can result in a ban. Finally, ill behaviour in voice or text chat is also a bannable offence. If you have ever done any of these, then your ban is justifiable, and you can’t do anything to reverse it. However, if you are absolutely sure that you haven’t done any of the illegal activities and that your ban is a mistake, read on.

If you are innocent, then the most likely explanation is the post-patch bug. This often happens whenever there’s a new update. Namely, Easy Anti Cheat didn’t patch correctly alongside the game. You need to use the “Verify Integrity of Game Files” feature on Steam. This will almost certainly fix the “Inappropriate Activity Detected” error, provided you haven’t done anything wrong. Here’s how to do it:

NEXT POSTPlease Wait Until All Combatants Are Assembled Elden Ring