Elden Ring version 1.03 is here! It has brought an abundance of improvements and balance changes, but also some new story elements. A couple of NPCs have received additional questline content. And among them, the good old Patches. Patches can now be found at the Shaded Castle. There, he’ll give you a mysterious item for Tanith. In this article, we will explain everything we know about the Dancer’s Castanets item and Patches’ quest at the Shaded Castle. 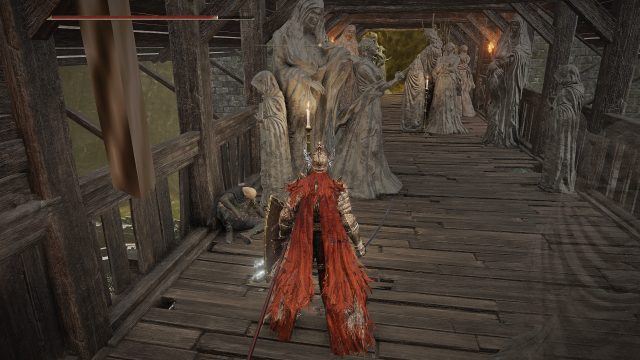 After the 1.03 update Patches can be found at the Shaded Castle (image via u/Pandoriux)

Original Story: With the arrival of update 1.03, Elden Ring players quickly discovered that Patches, the resident rascal in FromSoftware games, is no longer situated in Volcano Manor. Patches will leave the Volcano Manor after you defeat God-Devouring Serpent, a massive major boss in the area. If you are wondering about Patches’ new whereabouts, he is now located at the Shaded Castle. You’ll find him sitting on the wooden bridge just outside of the boss room. Watch not to accidentally kill Patches, because he will die from a single hit at the Shaded Castle.

Interact with him and Patches will give you Dancer’s Castanets. He’ll ask you to deliver it to Tanith. Now, most players will have trouble fulfilling this part of the quest. That’s because many have already killed Tanith in order to grab her Consort’s Set. But, if Tanith is still alive, you can visit her in her chambers, where she’s eating Rykard’s dead body.

Give Dancer’s Castanets to Tanith, and surprisingly, she will say that she doesn’t need it, and will continue eating Rykard’s head. And although the item has no effect on her, it will still disappear from your inventory when you give it to her. Some players think that we need to give this to her at some different stage of the game, or under different conditions, in order for something to happen. Clearly, there are some steps we’re missing and when we find out, we will update the article!

When it comes to Patches, he will mysteriously vanish after he gives you Dancer’s Castanets. When you reload the game, he will not be at the bridge. Though he doesn’t drop his bell bearing, so many players speculate that he is still alive in some other location. For now, that’s all we know about the new Patches quest in the 1.03 update. if we learn more about Dancer’s Castanets, Tanith, and Patches’ new whereabouts, we will update this guide!