Elden Ring 1.04 update has just arrived. And while the biggest focus of the new patch is on balance changes and adjustments, our good old friend Patches has received additional phases.
▼Article Continues Below▼
If you want to know where to find Patches’ location after the 1.04 update, as well as how to get the “Patches’ Crouch” gesture, this guide will explain everything step-by-step. 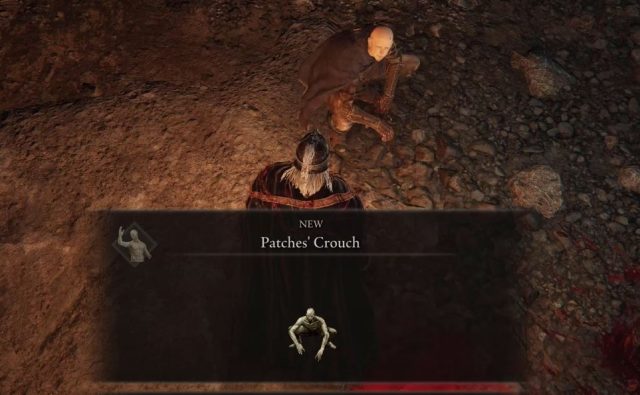 Where To Find Patches After Elden Ring 1.04 Update

Back in March, with the Elden Ring 1.03 update, the Patches NPC received some additional story elements. He suddenly appeared at the Shaded Castle, and he gave us Dancer’s Castanets. He kindly asked us to deliver the Castanets to Tanith. That didn’t go all too well. Tanith refused Dancer’s Castanets, as she didn’t find the item to be useful to her. And for things to get even more confusing, Patches mysteriously disappeared.

He was nowhere to be found after our encounter with him at the Shaded Castle, and players simply assumed that he was dead. But, it turns out that’s not the case. With the latest Elden Ring 1.04 update, we can now find Patches again. So, where to find patches after the 1.04 update?

After he disappears from the Shaded Castle, what you need to do is to go all the way back to where you originally found him – inside the Murkwater Cave. Enter inside, try to loot a chest there, and he will jump out. Initially, he will want to fight you, but you MUST NOT KILL him. He will quickly recognize you and beg for mercy. Just stop the fight, spare him, and he will give you the “Patches’ Crouch” gesture. Listen to what he has to say, and upon exhausting all dialogue options, he will again become a shopkeeper again. And with that said, that’s all you need to know about Patches location in Elden Ring 1.04 update and how to get the “Patches’ Crouch” gesture.