As befits a Dark Souls-like game developed by From Soft, Elden Ring is likewise filled with all sorts of deadly enemies. If you are not careful, these can easily kill your character. But there exists an even more powerful and fearsome class of enemy in the game called Demi-Gods. Starscourge Radahn is one of these and defeating him will take a lot of skill and effort. Though, once you do manage to take him down, you will be rewarded with a special Great Rune. However, this is only half the process, since you will also need to know where and how to activate it so that you can use its full power. In this guide, we will explain both where you can get the Radahn Great Rune, and also how to activate it in Elden Ring. 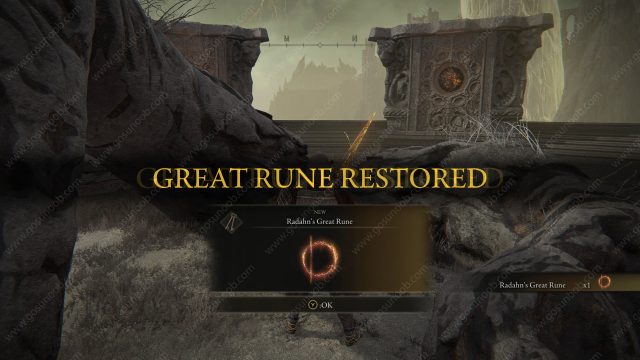 How to Get Radahn Great Rune Elden Ring

To be able to get Radahn’s Great Rune, you will first need to, naturally, defeat Starscourge Radahn in battle. He can be found in a portal in Redmane Castle, in the Caelid region. If he isn’t spawning, we recommend you read our guide on how to overcome this issue. In any case, once you beat him, he will drop Radahn’s Great Rune, as well as Remembrance of the Starscourge. You can give this Remembrance item to Enia in the Roundtable Hold to get either the Starscourge Greatsword (a Colossal Greatsword with Str D, Dex D, and Int E scaling, which requires Str 38, Dex 12, and Int 15. It provides the Starcaller Cry skill), or the Lion Greatbow (a Greatbow with Str D and Dex D scaling, which requires Str 22 and Dex 18. Wielding it will give you the Radahn’s Rain skill).

To restore and activate Radahn’s Great Rune, go to the Divine Tower of Caelid. Carefully make your way to the top of the tower. You can restore the Great Rune to its full power there. Radahn Great Rune increases your HP by 15%, Stamina by 12.5%, and FP by 12.5%. Incidentally, while you are in this location, you can also look for the Godslayer Greatsword and Godskin Apostle Armor.