The bread and butter of Soulsborne games are epic boss battles, and the same goes for Elden Ring. Coming from the minds of Hidetaka Miyazaki and George R. R. Martin, the world of the Lands Between is brimming with horrifying yet majestic foes that we will need to defeat. One of the first bosses you’ll likely encounter in Elden Ring is the ree Sentinel. As expected, he will mercilessly crush oblivious players who think they can challenge him right from the get-go. If you don’t know how to defeat Tree Sentinel in Elden Ring, check out our detailed guide. 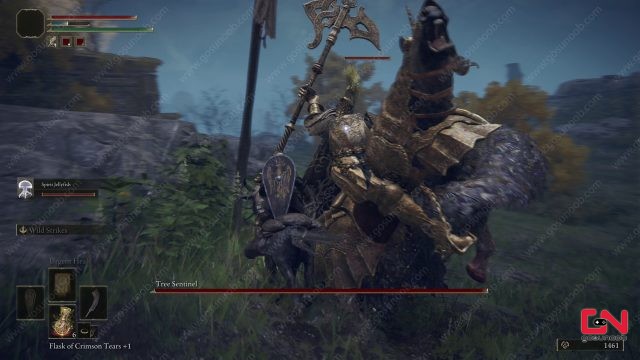 How to kill Tree Sentinel Boss in Elden Ring Easy

As we’ve already mentioned, the Tree Sentinel will probably be the first real boss you’ll encounter in Elden Ring. He’s located just north of The First Step in the Limgrave region. You’ll find him roaming around the path to the Church of Elleh. You’ll visit the Church to unlock crafting in Elden Ring, and that’s when you’ll most likely encounter him. And he will destroy you. That’s why you’re here now, searching how to defeat the Tree Sentinel in Elden Ring.

The first step is to completely ignore him. That’s right, do not engage with him at the start of the game, as he’s pretty much unbeatable. Instead, the most important thing is to unlock your mount. Read our guide on how to get the mount in Elden Ring. Now when both you and the Tree Sentinel are mounted, we’re starting the battle with a level playing field.

Another important factor is to enter the battle well-prepared. Have your flasks charged and ready. By this point, you should have at least a few Ashes summons which can chip in with some damage and soak the Tree Sentinel’s attacks. When they draw his attention, it’s a perfect opportunity for a free attack. The horse is his weak spot, so aim for the horse whenever you can. You’ll target the horse by pressing downwards on your controller right stick when attacking the Tree Sentinel.

It goes without saying, but you need to learn the boss’ attack patterns and abilities. The Tree Sentinel has a devastating but relatively slow attack which can be predicted. He also has a shield slam attack which is telegraphed by the horse’s jump. Play around these attacks, use any opening to attack him, and you will defeat the Tree Sentinel boss without many problems.

PREVIOUS POSTElden Ring How to Level Up