There are many secrets in Elden Ring. These can take many forms – from new areas to access, bosses to battle, and mighty items to earn. Though, due to the way that Elden Ring is designed, players can often encounter things that they are puzzled about and don’t know what to do with. Take for example the mysterious chest found in Nokron, the Eternal City. When you try to open it, you can receive a cryptic “You Are Not Destined To Open This” message. But is there a way to open this chest? And what can you find inside? Read our You Are Not Destined To Open This Elden Ring guide to find out! 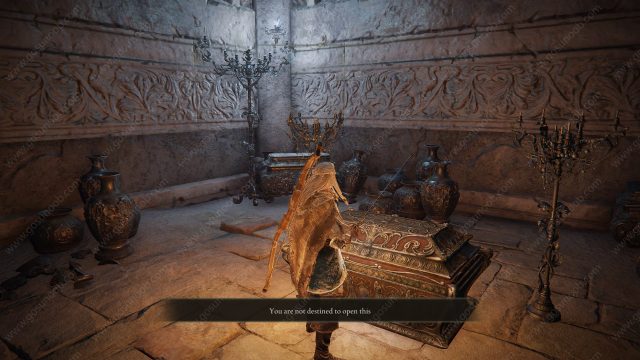 Due to Elden Ring’s non-linear, open-world design, you can reach this chest before the story intended you to. We’ll explain what we mean by this. This particular chest can be found under a gigantic skeleton statue in Night’s Sacred Ground – a location in Nokron, the Eternal City. If you still haven’t reached this city, we have a great guide on how to reach Nokron. When you get to this chest and try to open it, that’s when you can get this “You Are Not Destined To Open This” message.

If you are getting this message, it’s because you haven’t progressed Ranni’s quest far enough. During her questline, she will ask for your help with retrieving the “Hidden treasure of Nokron“. This is the treasure she was referring to. So, when you have gotten that quest from Ranni, you will be able to open the chest then. Inside, you will find the Fingerslayer Blade. Even though it sounds like a weapon, this is, in fact, a Key Item. Take it back to Ranni at Ranni’s Rise to progress the quest further.

PREVIOUS POSTElden Ring Mohg Great Rune, How to Get & Activate