Bloody Finger Hunter Yura is an NPC in Elden Ring. He is involved in a long questchain which will have you battle several Bloody Fingers. The rewards for going through his entire quest are the Nagakiba Katana and, later on, the Ronin Armor set. Though, since the questchain is very involved, there is always a chance that something will go wrong. For example, what to do if Yura is not showing up in Elden Ring in the locations where he is supposed to – the Second Church of Marika and Zamor Ruins Grace. Our Elden Ring Yura Not Showing Up, Yura Questline Nagakiba & Ronin Armor guide will explain the entire quest from start to finish, including how to get the Nagakiba Katana & Ronin’s Armor. 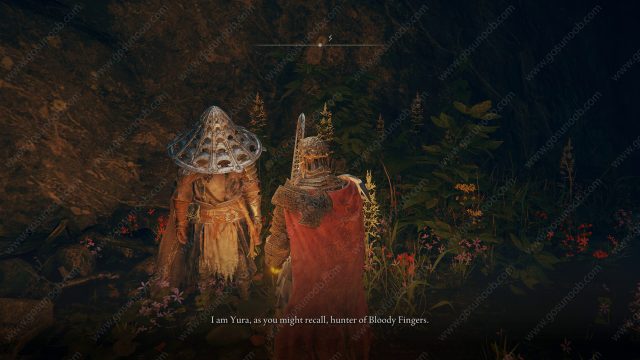 You will first encounter Yura near the Seaside Ruins in Limgrave. He will warn you against fighting the dragon at Agheel Lake. So, this being Elden Ring, this is precisely what you should do. Go to the Dragon-Burnt Ruins nearby. You will encounter the Flying Dragon Agheel there. Defeat it and go back to Yura. He will congratulate you for defeating the Dragon and explain that you can use the Heart of the Dragon you got from slaying the Dragon at the Church of Dragon Communion. However, he will caution you from doing so.

Next, go to Murkwater Cave. When you get to this location, you will get invaded by Bloody Finger Nerijus. Defeat him, and you will get Reduvia. This Dagger has Str E, Dex D, and Arc D scaling, and requires Str 5, Dex 13, and Arc 13. It gives you the Reduvia Blood Blade skill, and provides a passive blood loss buildup effect. Once you have defeated this enemy, keep moving north along the river. You will come across Yura once more. He will explain that he is hunting Bloody Fingers.

To advance Yura’s quest, go to the Main Gate of the Raya Lucaria Academy. There, on the bridge north, you will find a Red Summon Sign from Yura. He will ask your help in defeating the Bloody Finger Ravenmount Assassin. After defeating this enemy, you will get the Ash of War: Raptor of the Mists. Yura will thank you and give you a Smithing Stone [5]. He will inform you that his ultimate goal is to defeat the Bloody Finger Eleonara.

Next, go to the Second Church of Marika, a location on the Altus Plateau. There, you will encounter a dying Yura. He will lament not being able to defeat Eleonara. When he dies, you can loot his body to get his Nagakiba katana. As soon as you have done this, you will be invaded by Violet Bloody Finger Eleonara. Kill her, and you will get the Purifying Crystal Tear and Eleonora’s Poleblade weapon. While this may seem like the end of Yura’s quest, there is actually another part to it, that will enable you to get the Ronin Armor set. We will cover this in the next section.

How to Get Nagakiba & Ronin’s Armor in Elden Ring

So, to summarize – to get Nagakiba katana, you need to follow Yura’s questchain all the way until you find him at the Second Church of Marika. Or you can fight him the first time you encounter him to get the weapon. Nagakiba is an excellent katana. It has Str D and Dex C scaling and requires Str 18 and Dex 22. Equipping it gives you the Piercing Fang skill and it also causes blood loss buildup via its passive.

Now, on to the Ronin’s Armor Set. You will be able to get this armor regardless of how Yura has met his end. This is near the end of the game, at the Zamor Ruins Grace. When you get here, you will find Yura seemingly alive and well. It will turn out that his body has been possessed by Shabriri. Attack and defeat him to get the full Ronin Armor set, which consists of: Iron Kasa, Ronin’s Armor, Ronin’s Gauntlets, and Ronin’s Greaves.

NEXT POSTElden Ring Nagakiba Not Spawning