Freefall Armor is a unique item in Fallout 4 that is almost impossible to get from the 28th floor of Mass Fusion building. There are Right and Left leg pieces and when worn, they prevent falling damage. For a bonus that does not seem that important, Bethesda put this piece of armor in a very inaccessible place that you can reach only by spending considerable resources and using glitches in the walls (as far as we were able to conclude). In this guide, we’ll tell you all the necessary steps you need to take to obtain this rare piece of equipment without using cheat codes. Be warned that this is end game stuff and the following contains major story spoilers. 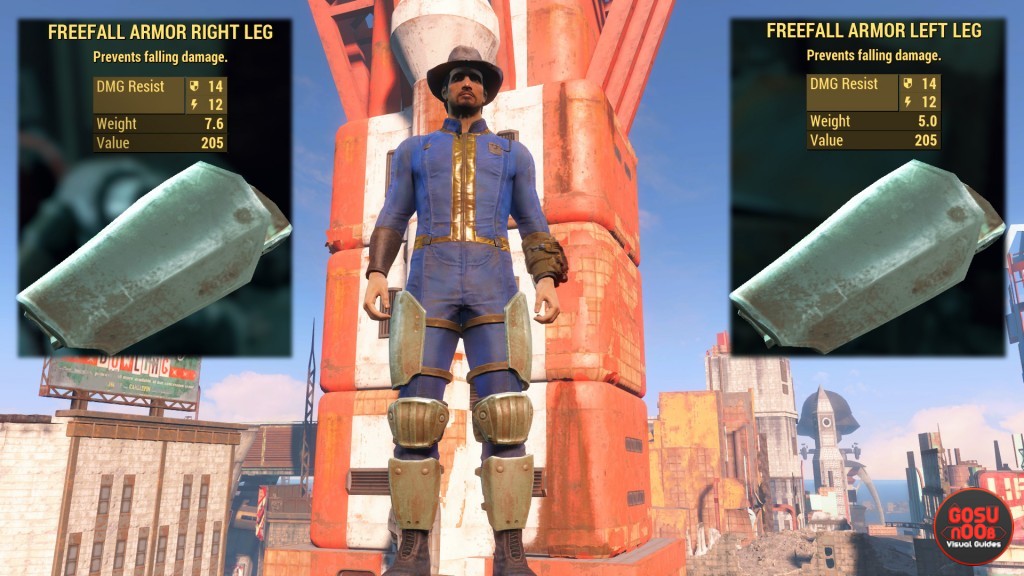 How to reach the 28th floor of Mass Fusion

Here’s a video guide showing the whole process, if you enjoy watching more than reading:


To even consider beginning this quest, you will have to meet the following prerequisites:

Getting to the roof of Mass Fusion

As you progress through the main story, you will reach a point where you get a chance to visit the Institute. In the meantime, you will probably get acquainted with the Brotherhood of Steel as well. Doing quests for either of these factions will make the other one like you less. If you are doing quests for the Institute, you will have to do Synth Retention -> The Battle of Bunker Hill -> Mankind Redefined, before you are able to get the quest Mass Fusion from Allie Filmore. You have to be deep into the Brotherhood questline to reach the Spoils of War quest, which takes you to the top of the Mass Fusion building.In any case: get your Power Armor (equipped with a Jet Pack) and advance the quest with your chosen faction to be transported to the roof of the Mass Fusion building. Get the Mass Fusion Executive ID and password from a table across the elevator and descend into the building. Once you deal with the enemies, you’ll find yourself in the heart of the building. Above you will be broken floors and below you’ll see the ground level through a glass floor. This is where you’ll have to start climbing.

Use your jetpack to navigate the broken balconies until you reach the highest walkway in the building. It will seem that there is nothing above except empty walls, but if you look closely, you’ll notice two holes in the walls. One of these is holding the items. It is hard to describe this and the video will show the process much better. What you need to do is use a glitch in the corners to gain higher ground and reach the first hidden room. I jumped from the ledge opposite of the hidden room, and as I gained upwards momentum, I used the Jet consumable to slow down time for 10 seconds. It gives you more control of both your upwards momentum and directional movement. You want to aim for the corner of the room and get as high as possible, while hugging the corner until you get glitched in it. It took me several hours to find the glitch and be able to repeat the process without much difficulty. Once you are standing in the glitch area, regenerate your AP and jump into the first hidden room. There is a fusion core inside, in case you need it. Next, jump into the final hidden room on the right wall. This should be easy enough if you made it to here. GOSU tip: Assign Jet and Quantum Nuka Cola to your favorites so you can use them mid flight without opening up the inventory. Quantum Nuka Cola is used to regenerate your AP mid flight, in case you run out and have not found the glitch yet.Inside is the skeleton of Jack Rockford. On his computer, you will find logs of his predicament. There is a safe next to his corpse with a Novice lock. Inside it are the Freefall Armor Left Leg and Freefal Armor Right Leg. These prevent falling damage and are probably the hardest items to find in the game. I just wish their bonus was something more than fluff. Perhaps its use is still hidden from us.Gosu tip: In this section of the building, you can also pick up a Tesla Science magazine. If you missed it, you can pick up the Strength Bobblehead by lockpicking the door that opens up pasage to the floors below.

PREVIOUS POSTHow to Get Better Vendors in Settlements | Fallout 4