Parsons State Insane Asylum is a very interesting location in Fallout 4. It contains two valuable collectibles – Charisma Bobblehead and Massachusetts Surgical Journal. It is also part of a very interesting side quest chain that rewards you with unique weapons Lorenzo’s Artifact Gun or Zeta Gun. In all probability you will also acquire some Mysterious Serum, which is a consumable that removes 36000 rads and provides +50 damage resistance and +5 STR. Quests involved in gaining access to Parsons are part of the Secret of the Cabot House side quest chain and are Special Delivery, Emogene Takes a Lover and The Secret of Cabot House. Warning: Spoilers ahead! 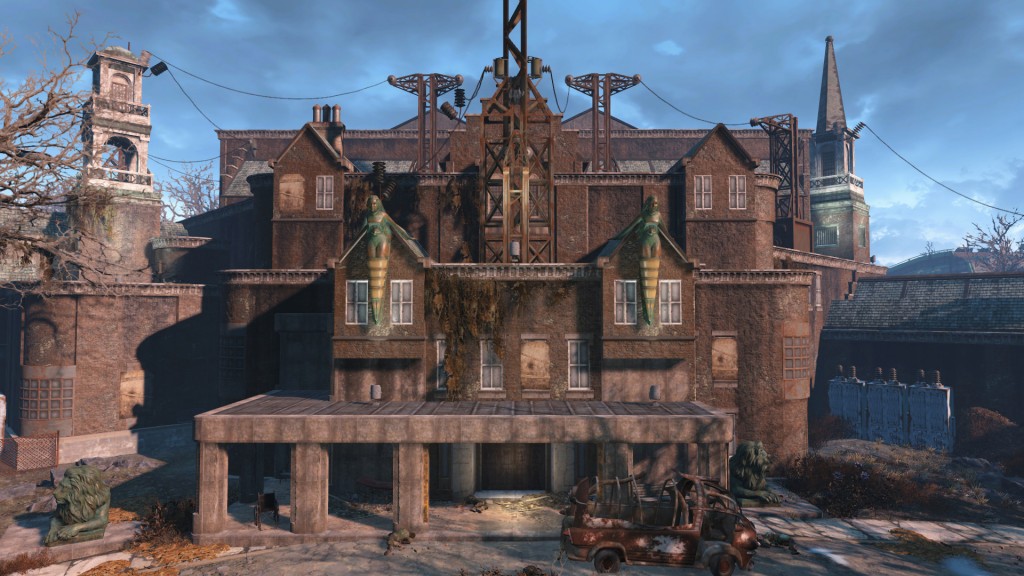 To even start the side quest chain you have to be at least level 10 and you have to have come across Parsons State Insane Asylum during your travels and kill the mercenaries there. Nothing will happen at that exact moment though and you will not be able to unlock the door to enter Parsons. From then on a ghoul named Edward Deegan might pop up in one of the following places: Dugout Inn in Diamond City, Colonial Taphouse in Diamond City, The Third Rail in Goodneighbor or Bunker Hill (next to the monument). You can actively visit all of these places to initiate the meeting with Deegan, or if you continue your adventure and come across any of these places Deegan will talk to you on his own (if he’s there). I found him at night at Bunker Hill.

Update: If you have high Charisma, you can start this quest by going to Cabot house (a bit west from Pickman Gallery) and using the intercom. Deegan will answer – just insist he lets you in (thanks to Seriuse for the tip).
He will give you the Special Delivery quest that requires you to visit the Cabot House where you’ll find out more about the story behind this side quest. You will have to clear a raider camp and retrieve a Mysterious Serum for Jack. If your Charisma is high enough you might be able to lie to Jack Cabot about the serum and keep some for yourself, or you can just hand it over to him. If you give up the serum you will be rewarded an additional 50 bottlecaps (not that worth it compared to the value of the serum itself). Try to be nice to Jack and agree to the things he says, because that will determine whether you will be able to get a Unique weapon as reward at the end of the chain.

You are in search for Jack’s sister Emogene. This is a pretty straightforward quest that first takes you to The Third Rail in Goodneighbor. You can talk to Magnolia, the singer,about Emogene. If you have high enough charisma you might even flirt and get into a one night stand with Magnolia (but that’s besides the point). Sister seems to have joined a cult. Go to Charles View Amphitheater and there are several ways to resolve the situation. You can just go hostile on the cult’s leader and kill him and his followers. Loot his office key to unlock Emogene. You can also sneak behind the Amphitheater and picklock the door. You can choose to join the cult, but that will mean that you have to turn over all your clothes and weapons.

The Secret of Cabot House

Quest chain ends with this quest. We’ve written a detailed guide about The Secret of Cabot House quest since it involves several choices for you to make, so I recommend you check that out. The point is that early on in the quest Jack Cabot will open the door to Parsons State Insane Asylum. Follow him for just a bit longer and you will reach Jack’s office, containing the charisma Bobblehead. At the end of the quest, if you played your cards right you might be rewarded Lorenzo’s Artifact Gun. Details about all that are in the guide linked above.

NEXT POSTWhere to find Dogmeat armor in Fallout 4