The Secret of Cabot House is the last in a small chain of Fallout 4 side quests that start when you talk to a Ghoul named Edward Deegan. It is an important side quest chain because it grants you access to Parsons State Insane Asylum, where you’ll find the Charisma Bobblehead, Massachusetts Surgical Journal and you can also receive a unique weapon reward – Lorenzo’s Artifact Gun or Zeta Gun. At the end of this quest you will have a choice to make and that is why we’ve written this guide; to tell you the consequences of your choice (in case you are wondering). This means that there are heavy spoilers ahead. Quests you need to finish to get this one are Special Delivery and Emogene Takes a Lover, but we’ll discuss those in another guide.

The first few steps of this quest take you to Parsons State Insane Asylum. Jack finally unlocks the building and you should follow him around as he makes his way toward his office. You will have to fight raiders along the way. At one point you will reach a chained room Jack opens and this is Jack’s Office. On his desk, next to the computer terminal is the Charisma Bobblehead. Keep following Jack to the main asylum and fight the Raider threat along the way. You’ll reach the laboratory where Lorenzo Cabot is being held along with some Raiders trying to get inside his cell. Raider mini boss called Lefty is the one you will have to be careful about, but he stands between you and Lorenzo so remove that obstacle. 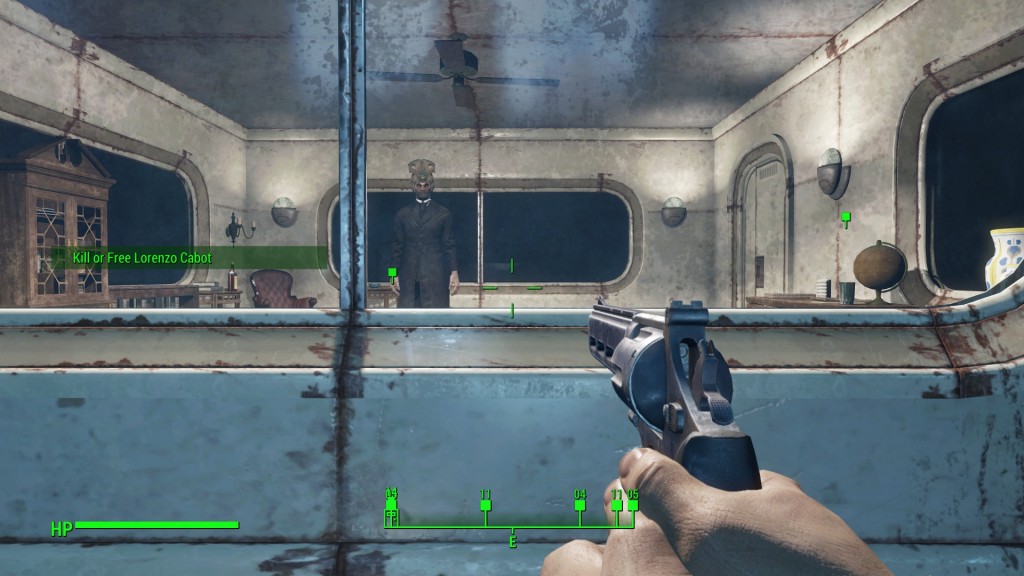 You now have two options. One is to flip the four switches around the room and kill Lorenzo, or set him free. Each choice has different rewards outcome (not to mention the morality of the situation you’ll have to live with). In either case don’t forget to pick up Massachusetts Surgical Journal in the room Lorenzo is being held in. It gives “Permanently inflict +2% limb damage.” perk (per issue of the magazine found).

Just flip all the switches and Lorenzo is no more. Going inside his cell you can find some nice scrap-able junk. Jack Cabot will be pleased and tell you to meet him at the Cabot House in about a week. You also get a nice reward of caps (I got over 500 when I handed it in). You can either play until a week passes in-game or sleep at a bed to pass the time. You’ll get an update of the quest saying Talk to Jack Cabot about the artifact. When you are there you will find out that Jack created a weapon that uses the artifact’s psychic powers to knock enemies about. If you were not rude to Jack over the course of his side quests he will reward you with Lorenzo’s Artifact Gun. Screenshot bellow shows the stats on the weapon, which uses rare Gamma Round ammunition. Weapon is also rather special because it applies knockback wave force to your enemies. You will have enemies flying through space in no time.

UPDATE: Player Egg rage from our Facebook page gave us the following tip: After you wait for a week to get the artifact gun you can go back to Jack Cabot’s house and find the Zeta gun on a table in his lab, on the second floor. This way you get both rewards. Cheers Egg rage. 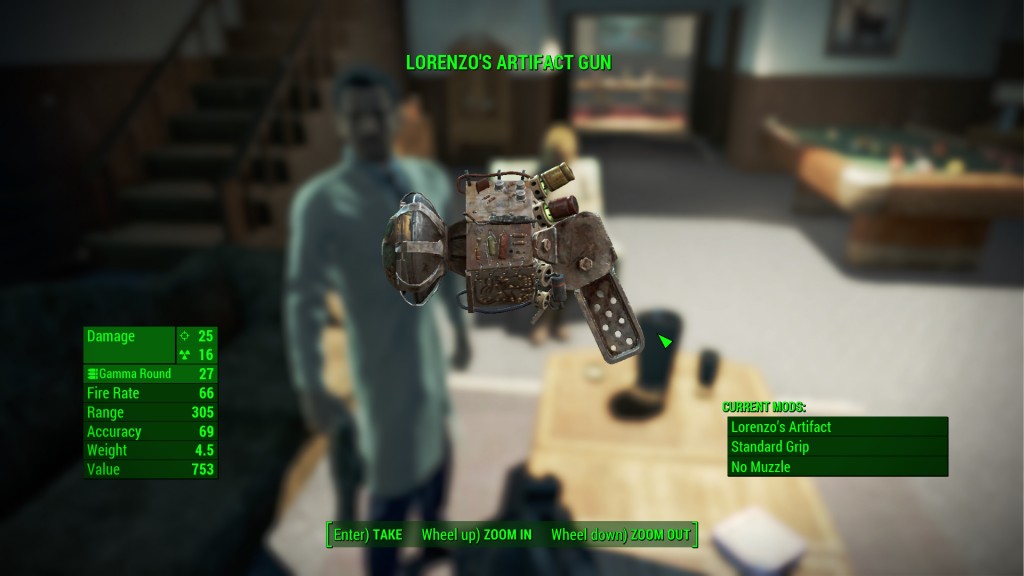 If you decide that Jack is just leeching off of his old man and think that Lorenzo is not crazy, you can decide not to kill him. Jack will run back to the Cabot House and Lorenzo will follow after him. Back at the Cabot House you have one more chance to change your mind and side with the family. Jack will start talking to you and you can choose to say that he is wrong, which will lead to you killing the family, or you can choose to say that you were wrong, which will lead to a fight with Lorenzo.

If you side with Lorenzo, killing the rest of the family is easy and you can loot a Zeta Gun weapon from Jack Cabot. It is a unique weapon that uses Gamma ammo and I did not find it particularly powerful. You will also get a vial of Lorenzo’s blood called Mysterious Serum. This removes rads, provides +5 STR and 50 damage resist. Once you use it you can come back to Lorenzo and pick up another vial, so you have an endless supply of antirads. You will also be able to have a random encounter with Lorenzo later in the game where he is investigating dead Ghouls. Your companions will largely dislike you killing the Cabot family, so have that in mind.

If you, however, change your mind and decide to kill Lorenzo after all, you are in for a tough fight. He has a lot HP and you should be careful of his psychic AOE attack. Make sure you inject the serum before fighting him – it will make you hurt him more in combat (thanks Alienfacepalm for the hint). In the end you will receive Lorenzo’s Artifact Gun and bottlecaps from Jack.