Prompto Argentum is a character from Final Fantasy XV. He is a sidekick, Noctis’ long term friend and trusted companion.
▼Article Continues Below▼
He is a master at using different kinds of firearms to devastate his enemies.

Prompto will have his own downloadable content after the game releases. You will have a chance to control Prompto directly and explore a new location with a new set of quests and a separate story. To play it, you will need to purchase the season pass or Prompto’s DLC separately.

Prompto will also be playable in a Playstation VR section of the game. As you can see from the E3 2016 trailer, you will be shooting Prompto’s guns at a huge behemoth using your VR controllers.

Prompto’s hobby is taking pictures with his smartphone. He likes to have all memories of adventures with his friends saved. He also likes to cheer up his friends whenever he has a chance. Unfortunately, as a child, he was very sad and alone, with no friends. During his school days, he was also a bit overweight, but eventually started jogging and dieting. During his workouts, he used to take pictures of his progress until he reached great form.

Meeting with Noctis was the main motivation behind starting his diet and workout.

Prompto prefers to use firearms in combat, including all kinds of shotguns and pistols. He carries the Auto Crossbow and the Bioblaster in his off hand.
As suspected, he likes ranged combat and supporting his teammates from a distance. He can also use different skills, such as Piercer, Starshell, and Recoil to stun and annihilate enemies.
As with any other party member, you can chain your attacks with Prompto for some high damage combos.

No matter what outfit you equip Prompto with, he will not give up his gloves. He also doesn’t like sleeves, long or otherwise. The main outfit you see him in most of the time is called Crownsguard Fatigues. These outfits give not only a different fashion style, but also buffs that can help in combat. 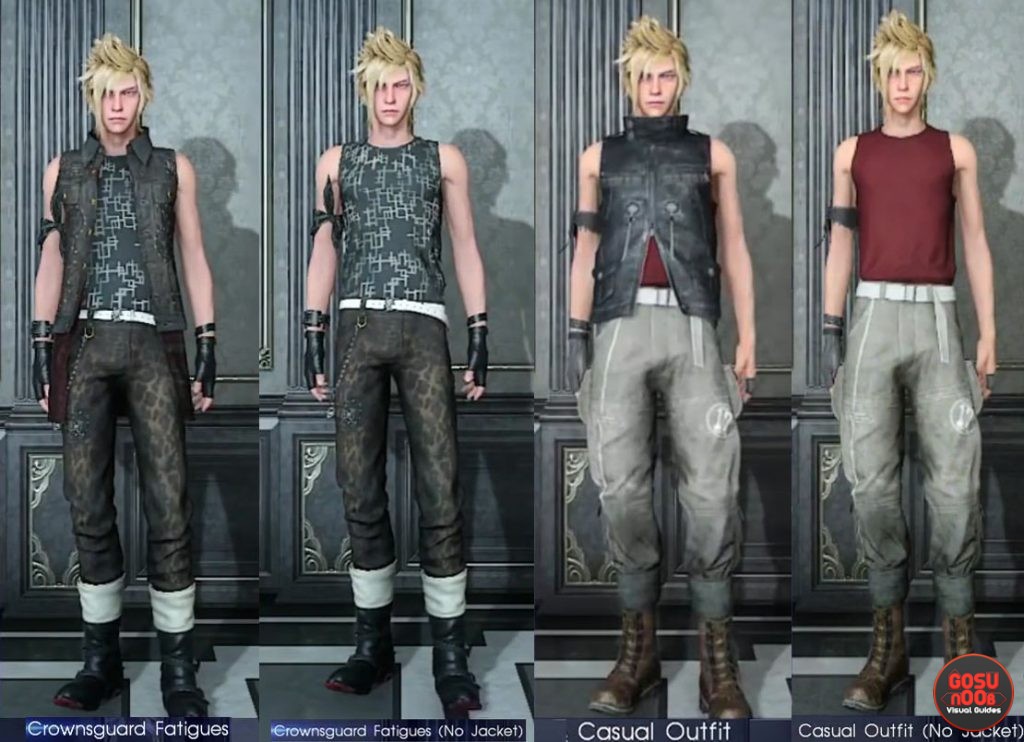 Some of the costumes Prompto can use, via character customization, are:

Prompto has a unique skill called Photography. Who would guess, what with all his love for pictures. There are different opportunities where Promto takes shots. Almost all of them happen when he decides the time is right. Most of them are taken during combat, or conversations. But, sometimes, you can even make him take them. These opportunities happens during the open world game play. There are certain points where you can make Noctis pose. These points can be benches, fences or anything like that. Someone will take note of it, and Prompto will take a picture. 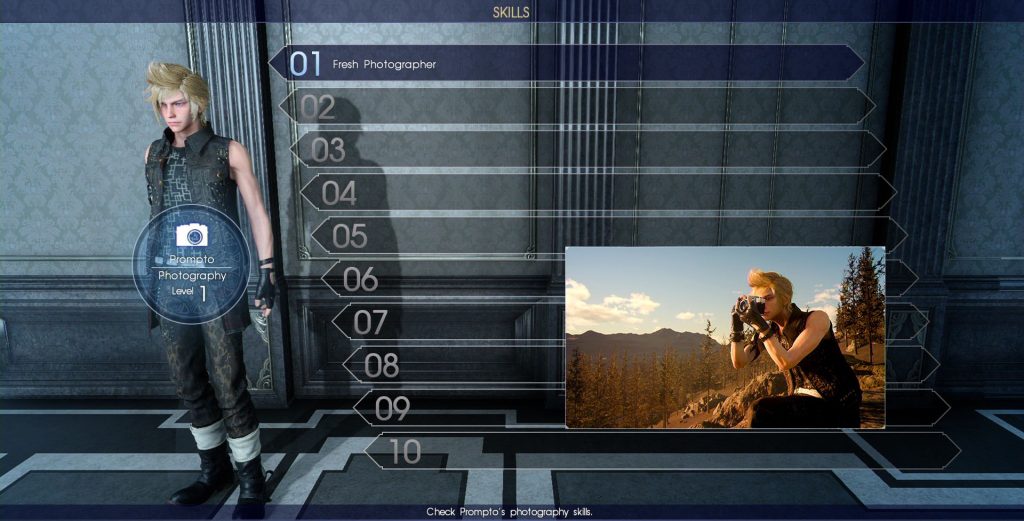 Out of all the pictures, you can choose which ones you want to be saved forever. This is done at the resting places, but with the latest in-game changes it might not be the case. Nonetheless, you can save up to 100 pictures.
Pictures don’t only serve as proof of the adventures in your playthrough. They can also give additional EXP and AP. This happens if you choose appropriate ascension grid abilities.

Unlike Noctis, Prompto has only a few dedicated ascension abilities. In the Stats ascension grid, you can find Accessory, which increases the number of accessories that can be carried. In the Exploration grid, Snapshot and Aperture – take photos in battle and increase the chance of gaining AP through snapshots.

Five of his dedicated abilities are found in Teamwork and Techniques ascension grids. They all boost his damage, and help out Noctis in some way. The most expensive ability costs 999 AP. It is called Limit Break. It breaks the limit on damage from Prompto’s abilities.