With the release of the Inazuma area in Genshin Impact 2.0, there also came new achievements, some of which were hidden and not necessarily known to all players. Since a large part of what makes Genshin Impact such a fun experience is figuring out all the requirements for these achievements and earning them, we’ve decided to help you get several ones you might not have been aware of. So, in this 5 Easiest Hidden Achievements In Genshin Impact Inazuma guide, we will be going over five specific and easy-to-get achievements. 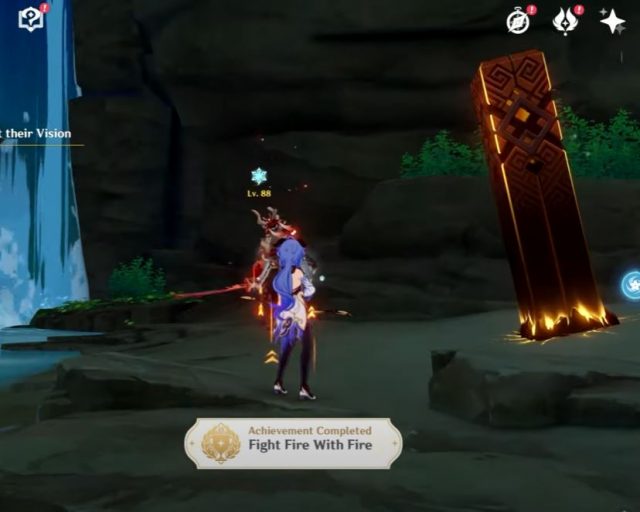 To earn this easy achievement – as well as the Primogems completing it rewards you with – you will need to defeat a Kairagi: Fiery Might, while they have their weapon infused with a Pyro effect. To be able to pull this off, locate a Kairagi: Fiery Might. Battle it, but don’t finish it off until you have seen that it has infused its weapon with Pyro. This is very easy to notice, since the weapon will be in flames. The best tactic is to whittle down its health and wait until it has done this, then obliterate it in one or two quick attacks.

A very straightforward achievement – the “I Hear Thunder” requires you to be struck by lightning while battling against a Crackling Axe Mitachurl. Note that it doesn’t require you to actually defeat this creature, just to get hit by its lightning. So, find one and fight it until it calls down a bolt of lightning at you.

Hidden Achievement #5: Hello…! Anyone In Here…?

This is a very fun achievement that also leads to a hidden quest. Our Ritou Road guide goes into great detail about this quest, but to earn the achievement itself, all you need to do is go to Ritou and enter a conspicuous trap door there. You can also see this entire quest in our video below.