The Inazuma update has brought many new additions to Genshin Impact, and like Mondstadt and Liyue, it also comes with its own reputation system and rewards. Raising your reputation in Inazuma is definitely worth it, since doing so comes with many rewards. Some of these include things such as new recipes and gadgets. In this Genshin Impact Inazuma Reputation Rewards guide, we will explain how to raise your reputation and list out all the rewards you can get from it. 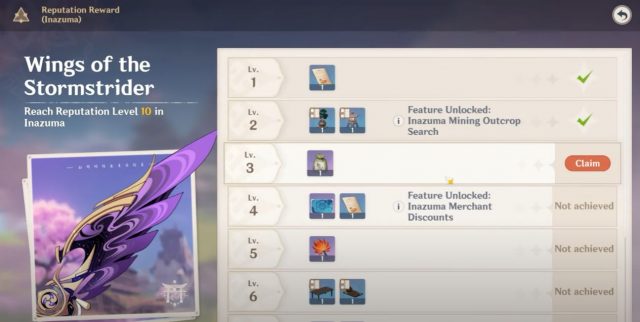 How To Raise Your Inazuma Reputation Level

There are several ways you can raise your reputation in Inazuma. The first of these is World Exploration. By exploring this new area and completing puzzles, unlocking teleport waypoints, uncovering secrets, and other such actions, you will slowly progress your reputation as well. The second way to do this is by completing quests in Inazuma. These include quests such as Orobashi’s Legacy, Tatara Tales, the Sacred Sakura Cleansing Ritual, and others. The third way is by doing Requests. You can complete up to three of these each week and they involve things such as defeating certain enemies. The fourth and final way is to finish Bounties. Like requests, you can complete three of these a week, and they award you with 60/80/100 reputation gain. In order to maximize your reputation level, it’s worth taking the 100 bounties the most.

You will get your rewards from Madarame Hyakubei. He can be found at the Kamisato Estate. Here is the list of all the rewards you can get, as well as the Reputation Levels needed to acquire them: