Peyote is a small white plant scattered across the map of San Andreas. It’s hard to spot, but you’ll hear a specific sound when you are close to it. After consuming this plant your character will start hallucinating and you will be transformed into a random animal such as a chicken, deer, seagull, hawk, crow, dog, cat, cow, pig, shark…. There are 27 hidden locations where you can collect this plant, and in the gallery and map below you can see all locations that we have found so far. When you collect all of the Peyote plants listed bellow they will respawn and you can collect them again.

You can become various new animals with the special ones being the Sasquatch and Chop. On land you can become boar, border collie, cat, chicken-hawk, cormorant, coyote, cow, crow, elk, hen, husky, mountain lion, pig, pigeon, poodle, pug, rabbit, retriever, rottweiler, seagull and west highland terrier. There are also peyote plants underwater that help you become one of the following sea creatures: dolphin, fish, hammerhead shark, killer whale, stingray and tiger shark. Bellow is the map of all locations and we’ll be adding screenshots for all the locations starting with biog foot and chop. 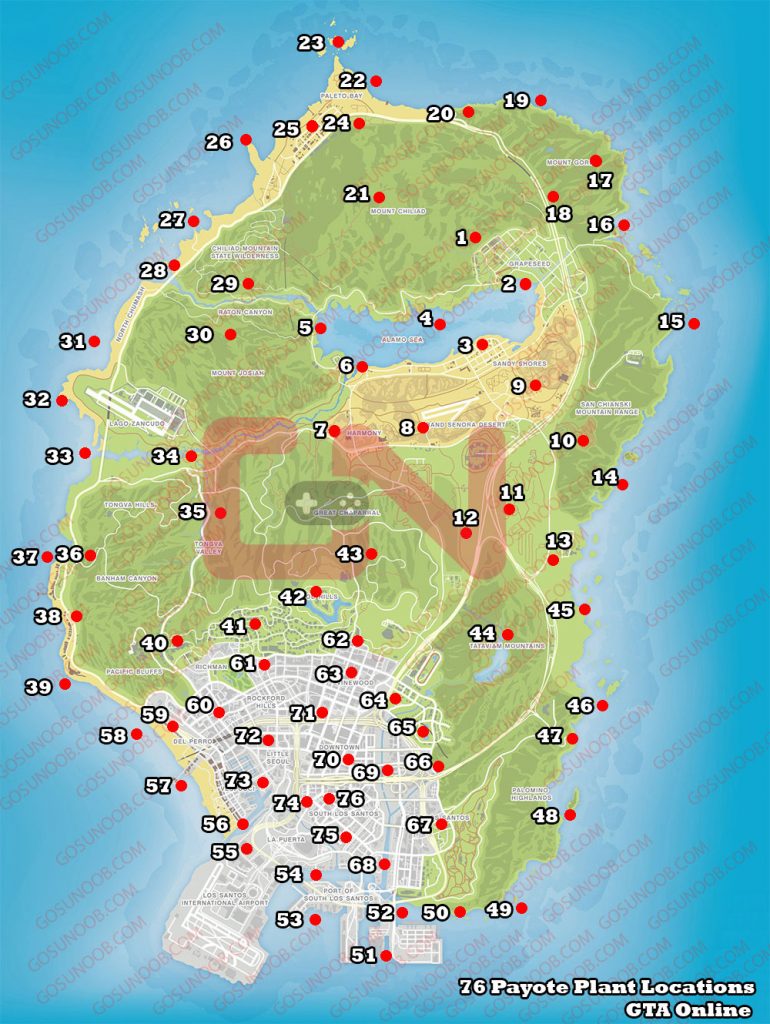 Go to Grapeseed at the base of Mount Chilliad. Find the peyote plant shown on the screenshot bellow and eat it between 3AM and 8AM in foggy weather. If you did not eat the plant during foggy time or in the hours mentioned above you can come back after 24 in-game hours and the plant will respawn. 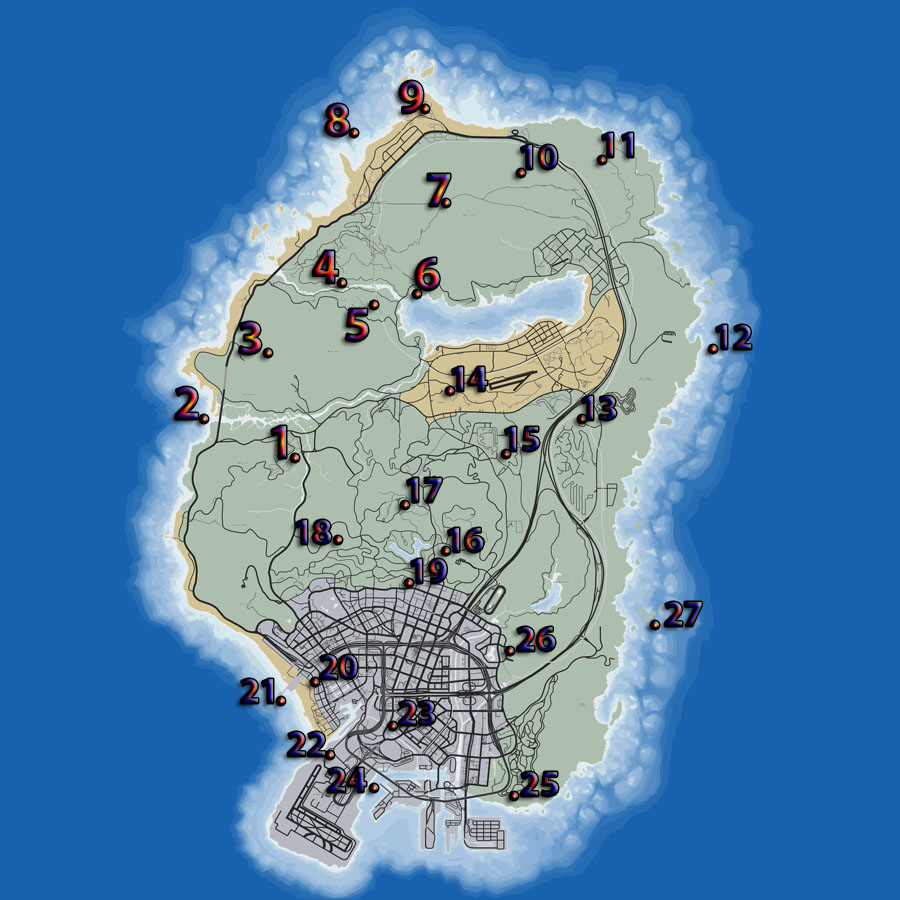 In Tongva Hills, when you reach the sign Two Hoots Fall, you will find Payote on a huge rock on a river bank, next to a small waterfall.

It’s pretty hard to find this one. It’s near Fort Zancudo. Look for a blue sunken ship. Just next to it you will find a plant in front of a blue sea coral.

On the ground, next to a dirt road, close to three similar sized bushes.

The next one can be found near Zancudo River in Raton Canyon on one of the mountain tops. If you turn left you’ll see a bridge, and you’ll have big rocks behind you. If you have a helicopter, use it to get to this one.

Another plant location in the Raton Canyon, but this time on the other side of the river. On the mountain top look for a wooden deck. It’s pretty hard to spot the plant at this location because it’s hidden among the rocks.

In the northwestern part of the Alamo sea, near the coast.

The next location is right on the top of Mount Chiliad, south from the Gondola Station, next to the red flags.

Close to one of the many rock “bridge” formations. If you approach it from the nearby shore, you have to go over/through/aside this “bridge” to reach the peyote location. Peyote is on sand, close to the purple underwater flora.

Another location on Mount Chiliad, on the northernmost part of the map.

Close to the two cactus bushes.

In the Mount Gordo area near a small lake look for the plant next to a tree. We suggest using a helicopter to reach this location.

This one is rather deep in the water. If you are here for the first time you might need help of an oxygen tank to safely breathe underwater. Boats, like Nagasaki Dinghy, give an oxygen tank upon exiting the vehicle.

Peyote is found next to a pile of metal bars. They are easily noticeable from far as they form a shape of a destroyed ship’s frame. There is a lot of junk near this Peyote: an old rusty trunk that hangs on the hill’s edge, an old ruined plane and more.

Within an area surrounded with short metal fence. Across from the “Peace” RV camper.

Close to the sand road and the nearby tall cactuses.

On the ground, between a small cactus bush and a larger non-cactus bush.

Close to a giant rock, across from the ranger’s house.

On the ground, near large bushes.

From the last building, go down the hill and you’ll find a plant near the sewer entrance.

On the highest floor terrace. This is the terrace that looks over a nearby street. Peyote is next to a parasol and a long tarpaulin.

On the second floor of the building, next to the small stairs.

Jump off the pier and look for peyote next to a white pillar and a huge rock.

Next to the side wall of Los Santos customs, you’ll find Peyote plant between a ruined bus and Forklift.

When you reach the baseball field in the La Puerta district look for the plant next to the fence.

Others: Find a group of three larger, green boulders. They are placed around some smaller seaweeds. Go toward them, and you’ll find Peyote just between the two seaweeds.

All the way down, before you reach the white fence.

Close to the backyard entrance of a house.

The next one is in the Pacific Ocean on a small island. It’s very hard to land a helicopter on the island.