Close Contact is the 24th main mission in Metal Gear Solid 5: The Phantom Pain. This is a rather short mission with lots of opportunities for extracting materials like four-wheel cars, cargo containers, soldiers and other. Extracting heavier stuff, like cargo containers, requires Cargo 2 Fulton Upgrade (which you should have by now). Using Quiet as your buddy and having her use her tranquilizing sniper works like charm.

Rescue the two civilian engineers, one male, one female, being held at Ngumba Industrial Zone, SW Guard Post. They were sent to the area by a medical NGO, but subsequently went missing. 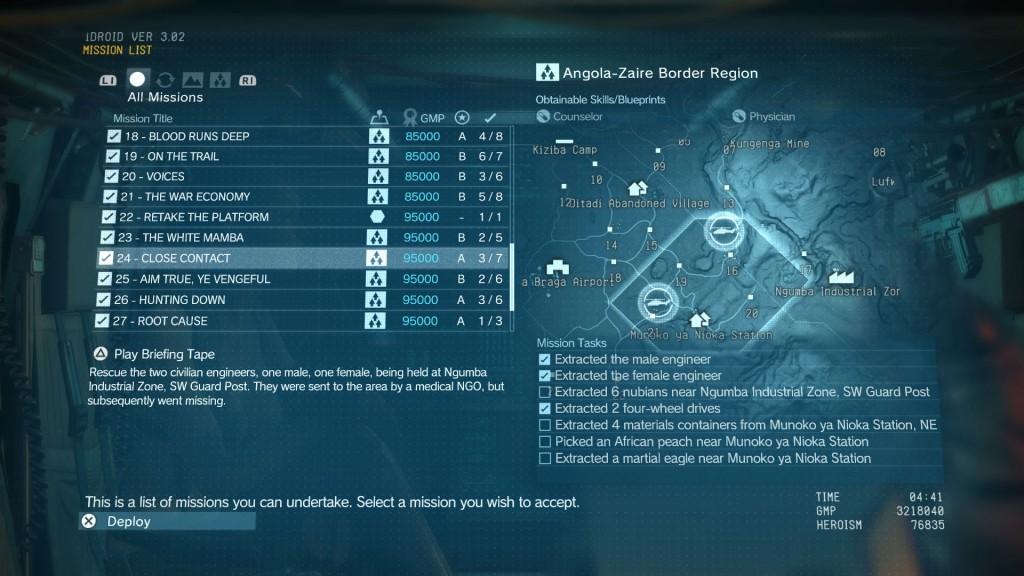 Male and female engineer are initially found in enemy outpost marked with number 20 on the map. As you come close to their location, male prisoner starts to run away. Try to extract him as quickly as possible because an alarm gets triggered soon after he makes a break for it.

Female engineer is found inside one of the two green tents in enemy outpost no. 20. The tent is easy to spot since there are many guards around it. Once the male prisoner escapes, guards will become alarmed and will start moving away from the female prisoner. Rush to the green tent, tranquilize soldiers and successfully extract the female engineer.

There are 6 goats around Outpost 20, extract them all. (thanks Nyx)

There is a large number of four-wheel drive vehicles on the road. The two you need for completing this task can also be found inside the enemy outpost 20.

Almost every outpost has material containers. Two of them are found in outpost 20. There are 4 at the NE Guardpost, Outpost 16 on map. (thanks Nyx)

Extracted a martial eagle near Munko ya Nioka Station

Bring D-Dog for easier marking, extract one of the eagles flying around near Munko Ya Nioka Station close to the NW Drop Point (Tranq rifle recommended)

We would like to thank Nyx for sending us additional information.