The White Mamba is the 23rd main mission in Metal Gear Solid 5: The Phantom Pain. This is one of the most unique quests so far. What makes it so distinguished from the others is the fact you can’t kill or choke anyone. The only gun that works is the tranquilizing one. Having Quiet as a buddy, equipped with the tranquilizing sniper makes this mission laughably easy. What doesn’t make it easy is the alarm – it makes the capturing of White Mamba more difficult.

Eliminate the militants at Masa Village who have been pillaging nearby settlements. They are said to all be children. Extract their commander, the “White Mamba”, and the group will fall apart. 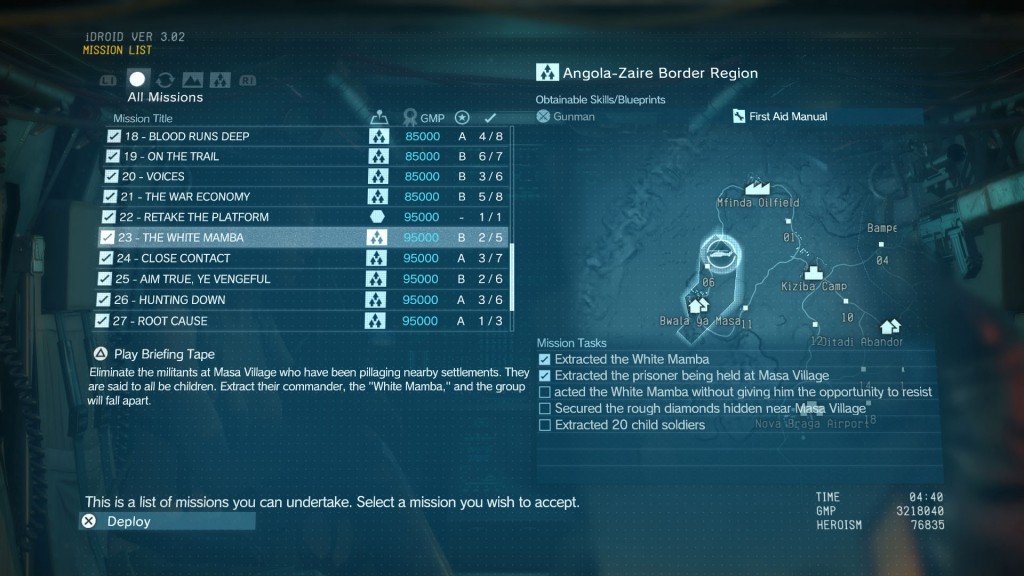 You can find this target inside the most distinguished building in the settlement. He’s in the rusty old ruined ship, on the higher decks. If you manage to alert him and get him to fight you, you’ll have to catch him a couple of times and defeat him more than once to make him stop resisting. This can be hard, as White Mamba is rather fast and likes to throw Molotovs at you. To make it easier, keep in mind that jumping toward him is the most efficient way to damage him. This is the move where you run/walk and decide to take cover fast. When you are in his vicinity, using this move damages him. Repeat several times and you’ll defeat him.

Extracted the prisoner being held at Masa Village

The prisoner is being held inside one of the houses in the northern part of Bwala ya Masa.

Extracted the White Mamba without giving him the opportunity to resist

Don’t alert the guards or the White Mamba. Get on his ship and wait until he turns his back to you. Shoot him in the head with the tranquilizing gun.

The diamonds can be found in outpost #6, north of Masa Village. They are in one of the green tents there (thanks Vincheezel and tziwei).

During your first playthrough of this mission, it is not worth trying to get this task done. To do it properly, you’ll need a child fulton upgrade that you’ll get later on in the game. You can try putting the unconscious kids into vehicles, then extracting the vehicles, but you’ll have to order them as supply drops, since there aren’t enough laying around.