Aim True, Ye Vengeful is the 25th main mission in Metal Gear Solid 5: The Phantom Pain. This is a rather short and simple main mission. To make it even easier take Quiet with you and equip her with her tranquilizer sniper. Just like in the mission 23 “The White Mamba” you you will be facing child soldiers.

Sleeping Gas Specialist is prisoner who escaped from Munoko ya Nioka Station.

A group of child soldiers who have broken away from the Mbele rebels have abducted their XO. Extract both the child soldier’s commander and the XO. 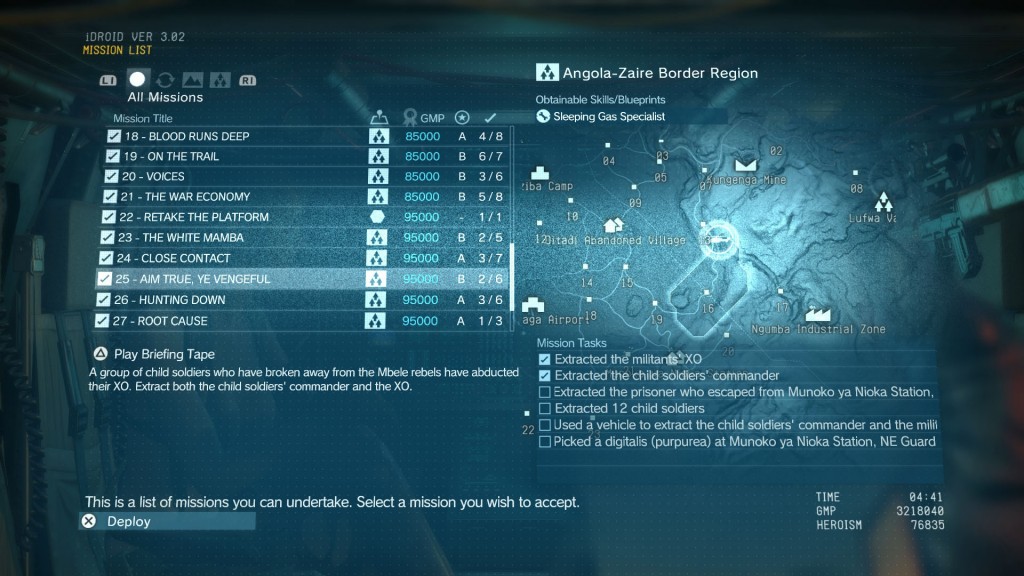 Militants’ XO is tied up on the ground, bellow a metal rooftop. He wears prisoner’s clothes and he’s the only “grown up” in the camp…

You can find the child soldier’s commander in front of, or close to, the green tent in the enemy outpost marked on the map with number 16. He wears a nice little red hat and that’s what sets him apart from the others.

Extracted the prisoner who escaped from Munoko ya Nioka Station

If you take the helicopter, you will find him near the LZ (both of them). But you gotta be quick. There are two animals going for a bite. It only takes one attack from them for the prisoner to die. He is also a Sleeping Gas Specialist. (thanks Romer)

In order to complete this task you need a special kind of Fulton upgrade. You’ll get it several missions later, so you have to come back and do this step again.

This is a special kind of extraction, three for the cost of one fulton. You have to place both targets inside a four-wheel car and fulton the car. Try not to fulton it like I’ve done; on the corner of the car. It is important to fulton it properly so that the passengers do not fall out, due to car leaning the wrong way when loaded with passengers. You can do it by fultoning the car at the center of its radiator.

The “Picked a digitalis (puprurea) at Munoko ya Nioka Station, NE Guard Post” quest is on top in the centre of the large hill located at the bottom west of the mission area. There are three to pick up to complete the mission.We would like to thank Steve for sending us screenshots and additional information.

NEXT POSTWhere To Find D-Walker | MGSV: The Phantom Pain