Hunting Down is one of the main Metal Gear Solid 5: The Phantom Pain missions. It is 26th in line. As the mission title says, you are on a hunt for a target. Completing the first mission task helps a lot in easier completion of the main objective, because it marks the target’s movement route. Extracting him and his escort is worth the trouble since they have decent skill levels and will benefit your Mother Base. Killing the target, on the other hand, and escaping the hot zone leads to faster mission completion. Make your decision based on whether you’re hunting for S Rank or just completing extra tasks.

Locate and eliminate the human trafficker who is on the run on the savanna. Reports suggest that locating the target will not be easy. 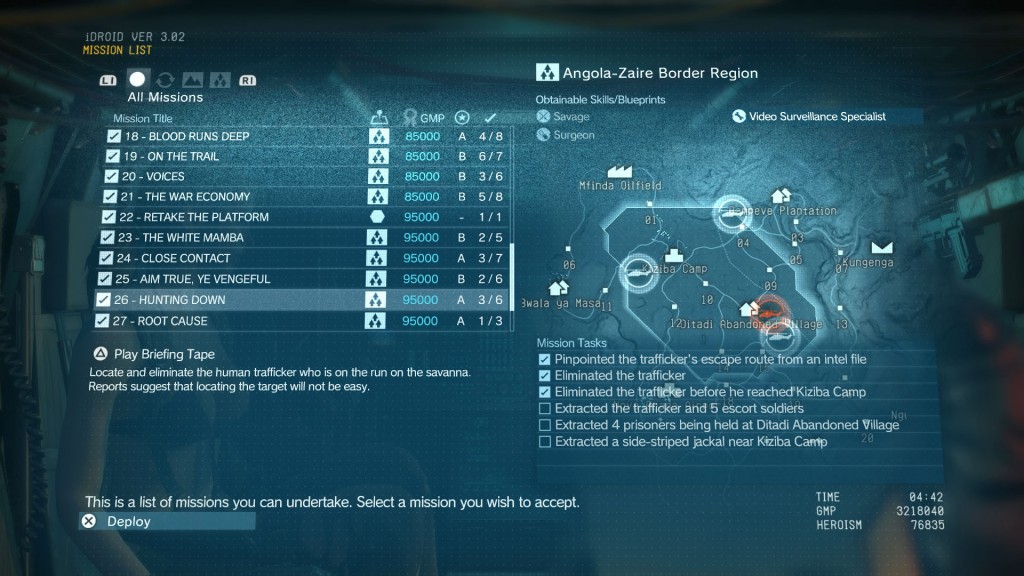 Pinpointed the trafficker’s escape route from an intel file

For starters, you want to choose the helicopter drop point closest to the Ditadi Abandoned Village. Head towards the village’s higher ground from there. There is a small camp there with several soldiers, one prisoner, antenna and the intel file.

Once you’ve found the intel file the probable route of trafficker’s movement is being shown on your map. From the southern part of the route and enemy outpost number 14 head to the Kiziba Camp.

Eliminated the trafficker before the reached Kiziba Camp

Stay alert once you shoot him down. If you haven’t killed/extracted his escort they will be aware of your possible location and head towards you. Sniper escorts don’t need to walk that much… NOTE: If you spend too much time on other mission tasks the Trafficker will reach Kiziba Camp and you will not be able to complete this secret objective.

Extracted the trafficker and 5 escort soldiers

Trafficker’s soldiers are scattered around their boss. Take care of the snipers first. They are extremely skilled and are a great asset to your mother base.

One of those prisoners is found inside the tent, near the intel file, while the rest are presumably inside the Ditadi Abandoned Village itself. This place is littered with enemy soldiers though. If you decide to complete this task together with all the other tasks you might have a problem with time. Just come back and replay the mission while interrogating enemy soldiers to get this task done.

One of those side-striped jackals is spotted west of Ditadi Abandoned Village, north-west of outpost #14. D-Dog can sniff him out, so you could take him with you.