On the Trail is the 19th mission in Metal Gear Solid V: The Phantom Pain. This is an extremely fun mission. You could describe it as running to three locations and extracting the target in the woods while surrounded by guards. It is advisable to get D-Walker or D-Horse as your buddy for this mission, as you can track mission targets more easily that way, but it is possible to track them by simply running toward their mark.

The commander of a PF, known as the Major, has been spreading a rumor about selling nuclear weapons. Tail his subordinate, and eliminate the Major. 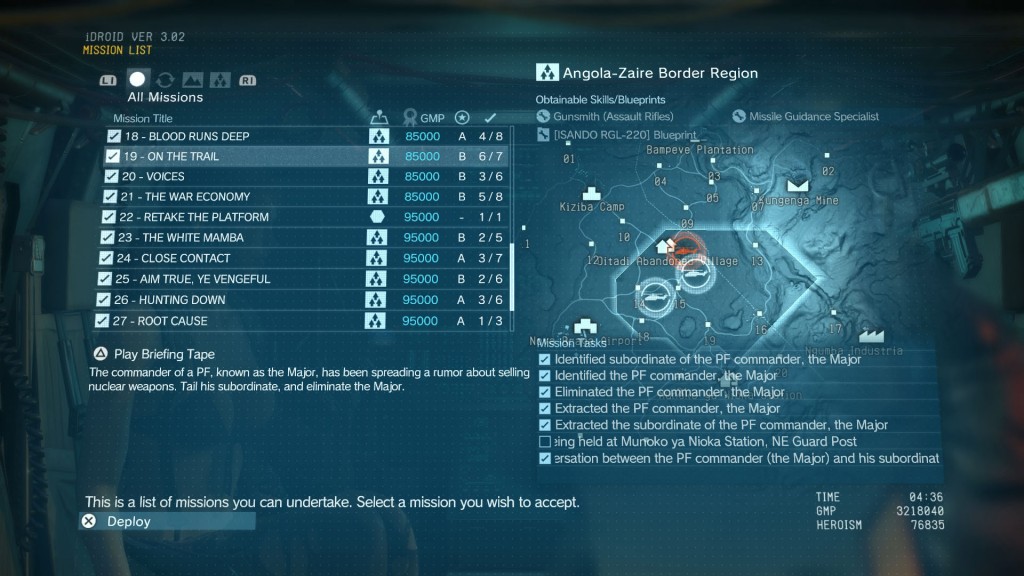 Identified subordinate of the PF commander, the Major

The first step in identifying this target is scouting the area of the outpost located at map mark 15. The target will eventually go to the car with his escort. From outpost 15, they will go to #19, and in the end outpost 16.

Identified the PF commander, the Major

The main mission target, the PF commander, is located in the woods, beside a road that connects outposts 13 (to the north) and 16 (to the south). You can find this exact place if you follow the subordinate of the PF commander without him knowing it.

Eliminated the PF commander, the Major

Whether you are going to kill or extract the Major, be sure that this will surely attract the attention of nearby soldiers.

Extracted the PF commander, the Major

There are numerous ways to extract both the Major and his subordinate. The most fun way is to place them both in the car and fulton the car itself. Be sure to do it when there are no alarmed soldiers nearby.

Extracted the subordinate of the PF commander, the Major

The subordinate is the one with the brown shirt, while the Major is the one with fancy dark glasses. As long as they don’t see you, you can put to sleep all the soldiers coming to investigate why their comrades are sleeping in their place of work.

The prisoner is in the post marked as number 16 on your map. He is inside the house across the road from the watchtower.

Coming from the south and outpost 16, you can approach the woods where the meeting is being held. The major and his subordinate won’t spot you coming. There is tall grass near them that you can easily hide in.