Voices is the name of the 20th main mission in Metal Gear Solid 5: The Phantom Pain. This is a rather simple mission but with a longer route to its main objective. The longer route requires walking past many soldiers, up to the area where Shabani is, and none of the soldiers are.

None, but there are several cutscenes making it forgivable.

Rescue Shabani, the leader of the boys who were forced to work at the mine. He was taken to Ngumba Industrial Zone, the place the locals call “the Devil’s House”. 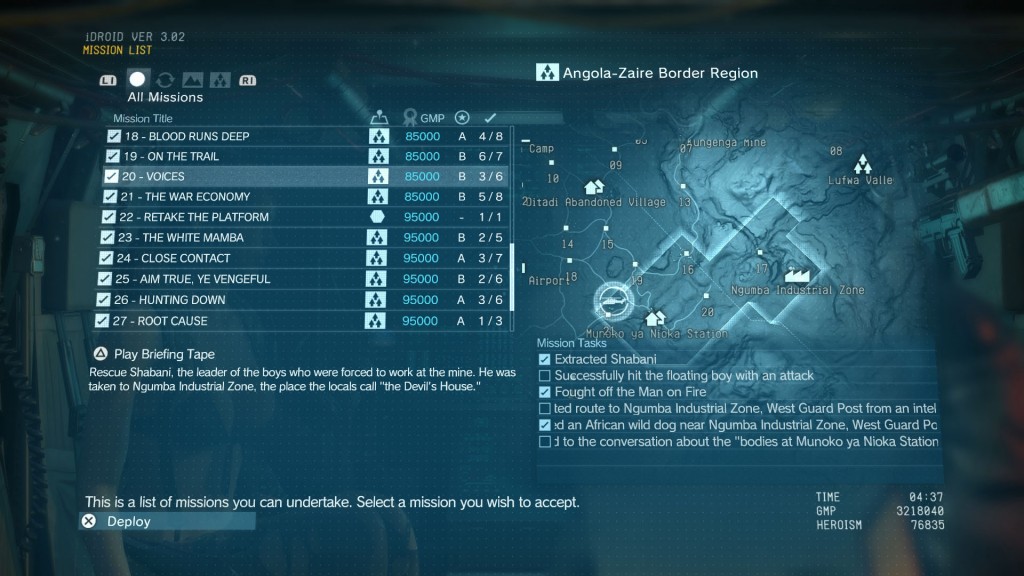 Fought of the Man on Fire

You can use the Water Towers in Ngumba Industrial Zone to complete this task. The way to do it is by gaining the attention of the Man on Fire by shooting in his direction. He tends to teleport to you once he finds out your location. Be sure to alert him when you’re near the water tower and the red barrel at its bottom. Shoot the barrel as the Man on Fire teleports next to it and it will bring down the water tower, disabling him for a while. Once the rain starts, the fight is over.

Successfully hit the floating boy with an attack

You can’t hit the floating boy with bullets, but after you bring the water tower onto the Man on Fire, the boy should float around him while he’s stunned, guarding him. You can order a supply or vehicle drop to where he’s lying, and it will land oon the boy.

The intel file is in outpost #20 – the one before the valley. You’ll find it in one of the tents (thanks JJ and Caboose).

As you go toward the enemy outpost marked with number 17 on the map, you’ll receive info about the area and the mist that covers the valley almost year round. Soon, the mist will become thicker and you’ll find yourself following a small river. This is when the wild dog should appear.

You need to reach the other side of Munoko ya Nioka station and a guard will come running down the hill towards the truck. He will drive the truck to the security checkpoint and continue on foot past the mist and will stop at the guard station before the tunnel and talks about the bodies. You have to follow the truck driver all the way to the tunnel at the end. Just hop in the back of his truck and listen to all his conversations, then when he gets out and starts walking follow on foot till he gets up the the misty camp before boss fight area. (thanks Stock and Samjay )

Previous Mission
On The Trail Next Mission
The War Economy