Skull Face is the 30th main mission in Metal Gear Solid 5: The Phantom Pain. It involves going to a silo in Afghanistan, passing through a XOF base and confronting Skull Face. It’s one of the hardest missions up to this point, as it involves a whole lot of heavily armored soldiers with walker gears, tanks and a chopper.

None, sadly. There are a lot of highly trained soldiers though, so if you need good fighters, this is the place to get them.

Skull Face has occupied the secret Soviet weapon design bureau OKB Zero, and advanced his plan to its final phase. Prevent the combat deployment of the upright bipedal weapon Sahelanthropus, and take vengeance on Skull Face. 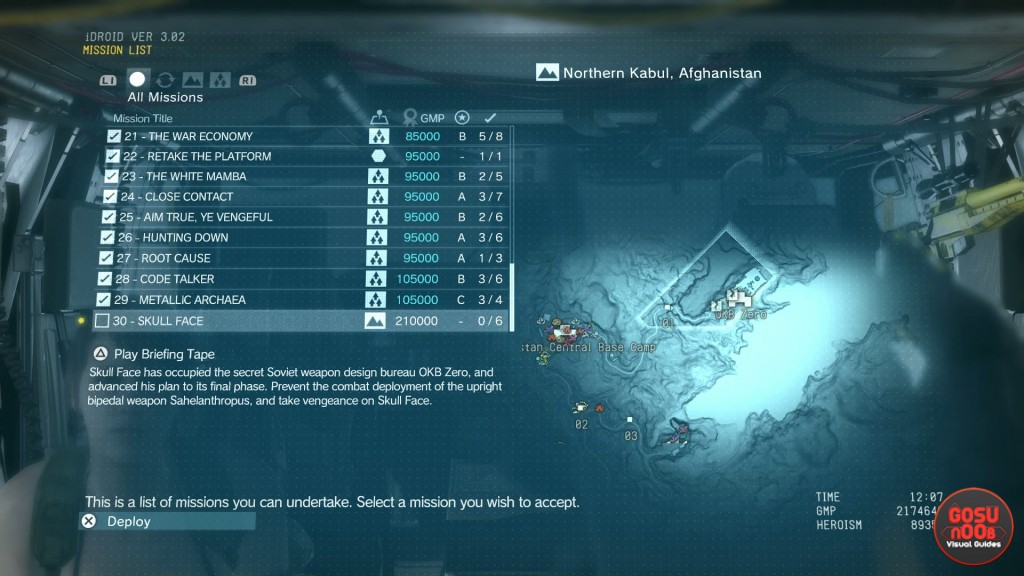 This one is easy to figure out – just follow the yellow marker into the silo. It’s not easy to do, however. You’ll have to go through 4 zones full of enemies, with a gunship scouting from above. If your plan is a stealthy approach, keep to the sides (left until the first gate, right until the second, then left again after the second). If you’re in a bind, you could always wait for a sandstorm.

Got information from Skull Face

Like any good villain, Skull Face will explain his whole plan to you once you meet, confident you won’t live long enough to foil it.

There’s one Walker patrolling each of the outside areas (clearly divided by gates). You can’t miss them, but extracting them will require taking care of a lot of soldiers.

When you climb to the top of the silo, instead of going straight to the helipad, go left and find the elevator. The tape isn’t playing, so don’t try to find it by hearing.

The first batch of red containers can be found after the second gate. There’s four of them in a row to the right of the gate. The other batch is after the third gate – two are behind the tank to the right, while the last one is next to the silo, on the left.

The first tank is by the road, after the first gate. The second tank is in the vast courtyard following the second gate. The last tank can be found after the third gate, as you leave the tunnel.