The War Economy is the 21st main mission in Metal Gear Solid 5: The Phantom Pain. It takes place in Angola, and requires you to crash a meeting between a CFA official and an arms dealer. Eavesdropping on their conversations yields interesting results, and the optional mission tasks are harder than they look.

Eliminate the CFA official stationed at Nova Braga Airport. He is due to conduct an inspection with a visiting arms dealer, so expect heavy security. 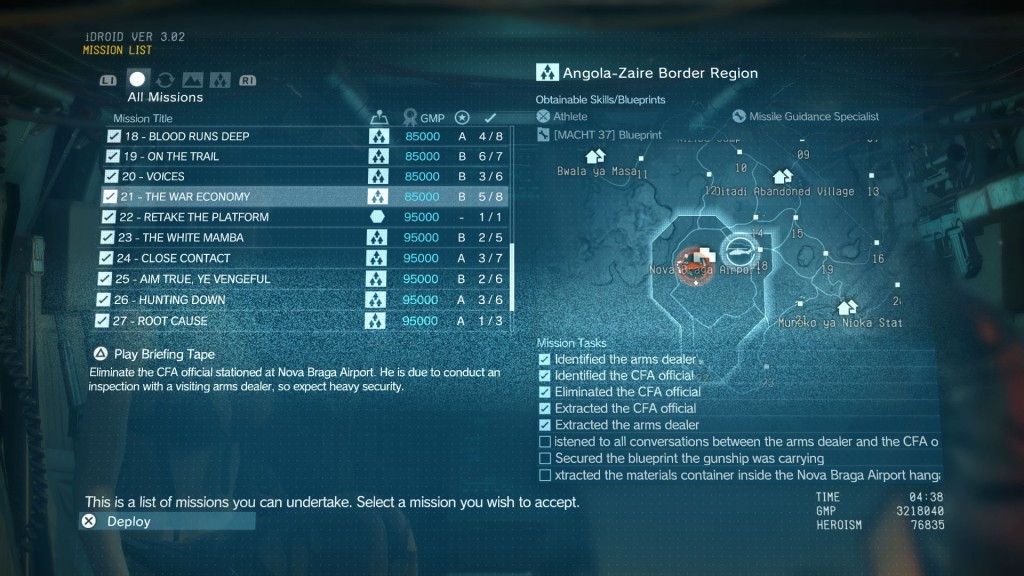 The CFA official awaits the arms dealer in the main airport building, on the first floor, next to the radio station. He stands out from other soldiers with his business suit. If you don’t reach this area quickly, he and the arms dealer start to patrol around and inside the building.

There are no consequences for killing him, beside not being able to finish the next task.

Extracting this target felt wrong – this guy deserved his destiny…

This feels like the main objective. If you extract him, he gives you additional info about his mission. Be careful as you do it – you don’t want to set off the alarm and bring the chopper into attack mode.

You have to be fast with this one. As the chopper lands on the main building, the CFA official goes to the second floor, where he meets with the arms dealer. You can listen to the conversation from the spot facing the entrance to the building.

Secured the blueprint the gunship was carrying

The gunship carrying the arms dealer also has a blueprint. If you shoot the chopper down, you’ll get to scavenge the blueprint from the wreckage.

Extracted the materials container inside the Nova Braga Airport hangar

The depot with the containers is in the southern part of the airport. You’ll have to develop the Wormhole Fulton Upgrade before you can snatch them.