Star Wars Battlefront 2 will be released in fall, 2017. Electronic Arts chief financial officer Blake Jorgensen confirmed it during the investor call. He also stated that the game will be extremely deep and engaging. The game will be developed by DICE with help from a new studio called Motive. 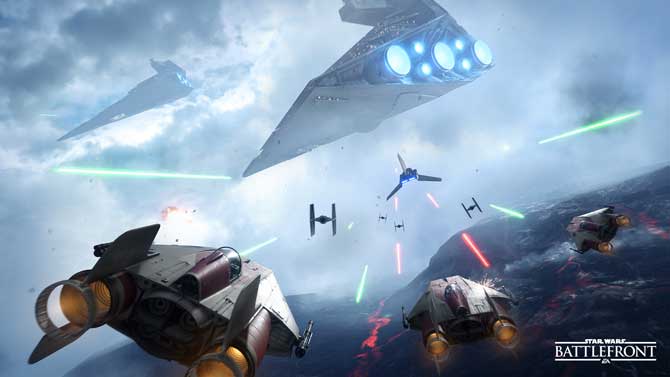 The previous Star Wars Battlefront was a solid game, but it was simply lacking some depth. Hopefully the next one will have more engaging maps and game modes, maybe something similar to the operations mode in Battlefield 1, which is one of the favorites in the Battlefield community today.Dice did a solid job with the Battlefield 1 single player campaign, with different stories that took place in different time periods and battles.
Maybe we can expect something similar with Battlefront 2, since the previous Battlefront did not have the single player campaign and was focused on multiplayer only. The same formula that worked with Battlefield 1 could be a nice decision for Battlefront 2.
Imagine campaigns where you can play as Darth Vader, Luke Skywalker, Obi Wan and Yoda all in one game. There are many possibilities but we will see the final result next year. For now, we can only speculate.

Also, according to EA games, we can expect one Star Wars title for every year for the next three to four years. Titanfall developers Respawn are making a third person action-adventure game in Star Wars universe. This is not a surprise since the previous Battlefront sold 14 million copies, and they are definitely hoping to repeat the same success. Disney Interactive is also making new Star Wars movies, so these are great news for any Star Wars fan.

Let us know in the comment section below if you are excited for Star Wars Battlefront 2, and if you would like to see the return of the single player campaign.

PREVIOUS POSTBattlepacks in Battlefield 1 – How to get them