In The Witcher 3, alchemy is the art of preparing potions, oils, bombs and decoctions. Depending on your preferences, you can rely solely on alchemy to get you through the game, or you can complement swordplay or casting with it. In this guide, we’re going to show you the best alchemy builds we’ve used, their upsides and ways to achieve them.

You can also check out our guide Best Skills To Invest at Start. 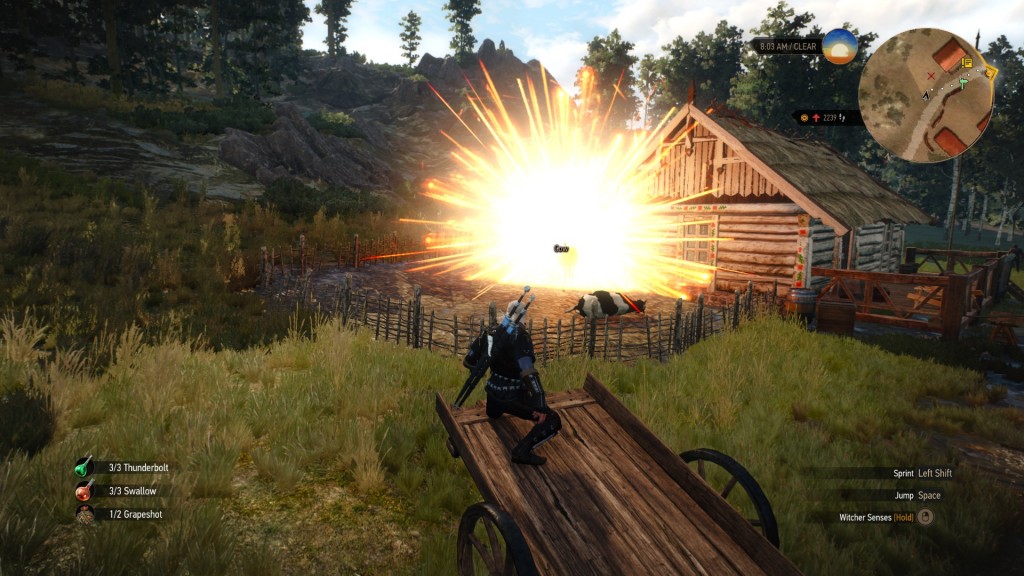 This build is all about bombs and chugging potions. You’ll have to invest in oils to unlock the second tier, but you’ll also get a good deal out of it – when you apply an oil to your weapon, you’ll have a 25% chance to poison the enemy, doing steady damage over time.

With potions, concentrate on Refreshment, Delayed Recovery and Side Effects. That way, every swig you take will heal you a fair bit, and have the added effect of another random potion. On top of that, as long as your toxicity bar is more than half full, the effects of the potions you drank won’t stop, even if their time is up (doesn’t work with decoctions).

As far as bombs go, you should take Steady Aim, Efficiency and Cluster Bombs. After you’ve upgraded them all the way, you’ll have more time to aim, and 7 bombs of each kind, which split up into 6 exploding fragments upon detonation.

Finally, Acquired Tolerance will increase your maximum toxicity for every recipe you know, while Endure Pain will give you more HP when your toxicity level is high.

You’ll have loads of HP, healing with every potion you drink and bombs that can destroy groups of enemies in a matter of seconds. All you’ll ever have to worry about will be making sure the enemies are are as close to each other as possible.

The second build focuses on the heavy use of decoctions. These are special potions made from mutagens – they have greater effects than normal potions, they last longer, but drinking them costs more toxicity.

All the skills from the Mutation tree are essential – Acquired Tolerance, Tissue Transmutation, Synergy and Adaptation. When they’re all maxed out, you’ll have a hell of a lot more toxicity, +1000 max Vitality for every decoction you down (while it’s active), more health from slotted mutagens, and increased decoction duration time.

To unlock all of these, you’ll also have to get some other skills. We decided to go with Poisoned Blades, Refreshment and Delayed Recovery – oils gave us a chance to poison enemies, all potions healed a little bit and potion effects wouldn’t stop until toxicity dropped below the threshold.

There are two more important skills, in the Trial of Grasses tree – Endure Pain and Killing Spree. The first increases Vitality while toxicity is high, while the other increases critical chance after every kill when you’re intoxicated.

You’ve invested in skills that bank on high toxicity, so all you need to do is keep toxicity as high as possible. The best way to do this are decoctions.

The core idea is that you’ll drink two particular decoctions as often as you can – the Archgriffin Decoction and the Ekhidna Decoction. The former makes your strong attacks deplete your stamina in order to take 10% off the targeted enemy’s vitality. The latter causes stamina spending to regenerate health. Chug Tawny Owl to increase your stamina regeneration, and you’ll be invincible.