Blood Run is a main quest in The Witcher 3: Blood and Wine. It revolves around a fight with a mysterious murderer.

When word of yet another murder reached the tourney participants, panic broke out among them. Geralt, affected by no such emotion, remained on the killer’s tail as tehy rushed helter-skelter through the streets of Beauclair. The witcher finally cornered the murderer in an old, abandoned storehouse.

After you finish The Beast of Toussaint, Blood Run will automatically start. You’ll have to fight the murderer you were looking for.

You don’t need to win this fight in order for the game to progress. If you lose, Regis will appear and save you.

However, if you want to win, signs are your friends. Quen with the stunning effect can break the enemy’s combo, as can Aard. Yrden can stop him from teleporting around the room. 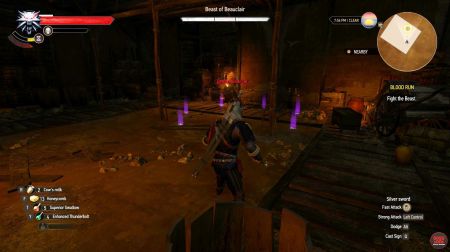