Evil’s Soft First Touches is the first quest you will get in the Hearts of Stone Expansion for Witcher 3. If you are continuing with your old character it should already be in your quest journal and if you are starting a fresh game of only Hearts of Stone you will get the quest as the game loads.

When Geralt later told me the story which began at the Seven Cats Inn notice board, he mentioned he had felt drawn to that place, as if some strange, undefined force wanted him to appear there on that day and at that time. I didn’t give this remark a second thought until I heard the tale to its conclusion, and realized its beginning had been no accident…

Check the notice board outside the Seven Cats Inn.

Go to the Seven Cats Inn to the east of Novigrad and use the notice board. Read the note titled “Contract: Monster in the Sewers”. A certain Olgierd von Everec is looking for someone to kill a beast that is lurking in the Oxenfurt sewers and preying on the innocent. 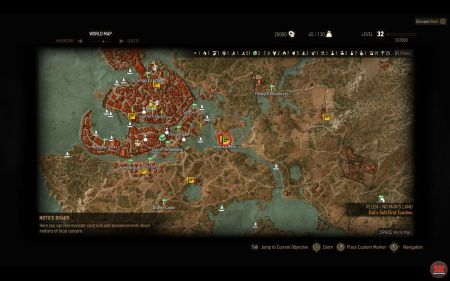 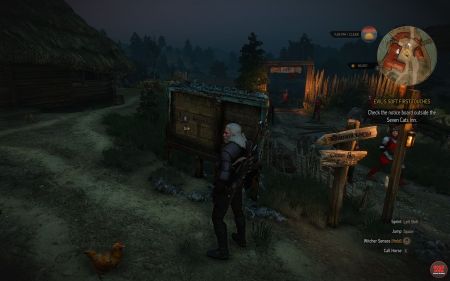 You’ll need to go to Garin estate and talk to Olgierd. The estate is located to the northeast of Novigrad (check the map below for the exact location).

When you get to the estate, you’ll be introduced to a merry band of cutthroats intent on joking with you. Choose whichever dialogue option you want, and one of them will eventually take you to Olgierd upstairs.

Apparently, Olgierd knows nothing about the monster other than his cook fell victim to it. 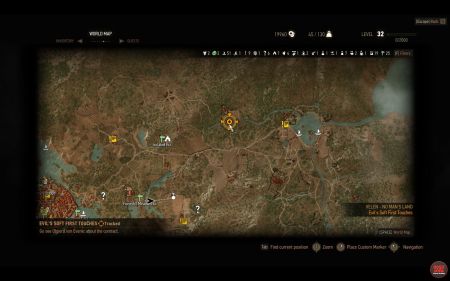 Click on the thumbnail to see the original image.
Garin estate location 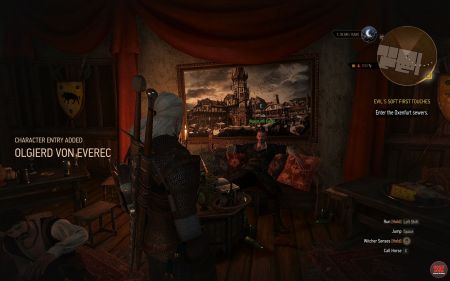 Click on the thumbnail to see the original image.
Olgierd von Everec

When you exit the manor, you’ll be accosted by a cheeky lass who wants you to investigate a murder. This will start the “Rose on a Red Field” secondary quest and is not a part of the main quest.

Head over to Oxenfurt and enter the town through the northern gate. You’ll find the entrance to the sewers, in the form of a dilapidated well, in the market a little down the street from the gate. Go down the ladder to enter the sewers. 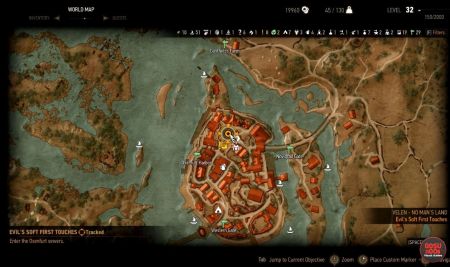 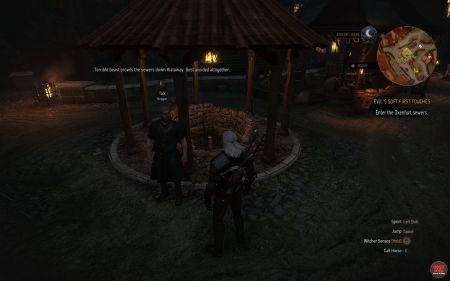 Activate your Witcher Senses and follow the footsteps through the sewers. You’ll find a corpse in the first chamber. It was apparently killed with a blade, so you may not be after a monster after all.

When you enter the next chamber, you’ll come across a woman trying to resuscitate her fallen comrade. It’s Shani, on a mission to extract a venom sample from the monster in the sewers. You’ll start a conversation with her and learn that the monster you’re after is not afraid of fire. She’ll also show you where the monster attacked her.

The monster had weakened one of the walls in the chamber, so use your Witcher Senses to discover a damaged section of the wall to the right of the grate. Break it down however you wish.

You’ll find the bodies of Shani’s comrades on the other side, which will trigger another cutscene. You’ll learn that the lower level of the sewers had been locked for a long time, but that the commander of the soldiers, Vern, had a skeleton key with which it could be opened.

Jump into the pit that is in front of you when the cinematic ends, then prepare to fight Drowners. The best way to beat them is with the Grapeshot and Dragon’s Dream bombs or with the Igni spell. Drink a Tawny Owl potion if you have one: it will boost your stamina regeneration and help you cast spells more quickly.

Explore the lower level of the sewers and help Shani find a good sample of the beast’s venom. Use your Witcher Senses to discover another grate in the wall. Open it and enter another chamber. Ahead you’ll have a corridor with a dead end; to the right there will be a larger area with a wooden door on the far end.

Go through the door and down the corridor to reach a circular room filled with corpses. You’ve found the lair of the monster. Talk to Shani, and then summon the monster.

You’ll now have to fight a giant toad. It is best to use a Northern Wind bomb to freeze the enemy temporarily and attack while it is incapacitated.

The toad will poison you with its venom as you deal a final blow across its belly, sending you down to the ground where you’ll loose consciousness, but not before witnessing the toad’s metamorphosis into a man. It was a prince after all! A group of Ofieri will then show up and carry you away.

You’ll find yourself imprisoned on an Ofieri ship, where you’ll learn that the toad you killed was actually an Ofieri prince who had a curse upon him. You are now being shipped to Ofieri to answer for your crime.

You’ll engage in a conversation with another convict, after which an old acquaintance will appear- Gaunter O’Dimm, a.k.a. Master Mirror. He’ll help you escape if you agree to return the favor. He’ll also leave you a mark on your left temple, as a sign that you’re his “associate”. You are to meet him at midnight at the crossroads near the willows near the village of Yantra.

Meet Master Mirror at midnight at the crossroads beneath the willows

You’ll find yourself being dragged down the beach with your hands tied. Geralt will then grab a stone and manage to free himself and kill a few Ofieri soldiers in the process. You’ll now have to finish off the rest of them.

There are six soldiers and one mage to deal with. The mage will teleport a short distance away every time you approach him, so you must either find a way to stun him, or use ranged spells to deal him damage. Take out the easy guys first, but keep moving constantly to avoid the mage’s spells. Then kill the Ofieri with the shield before moving on to finish the pesky mage.

Once you’ve killed them, summon Roach and head east across the water. You’ll come to a dilapidated cabin with several level 34 drowners.

Once they’re dead, go inside the hut and use Aard to blast several barrels off a trapdoor in the ground to the left of the entrance. Open the trapdoor and descend to the cellar below. Loot the corpse at the end of the small cellar to take a Rusted Key and a Letter written in Blood. This will start a secondary quest called “The Sword, Famine and Perfidy” You can do the quest immediately then return to main quest, but the rest of this guide will deal with the main quest only.

Exit the hut and head east through the forest. When you reach the crossroads outside the village of Yantra, meditate until midnight to have Gaunter appear. You’ll learn that Gaunter apparently has a bone to pick with Olgierd. He had done Olgierd a favor some time ago, and Olgierd is unwilling to repay the dept owed. That’s where you come in. He has three wishes he must fulfill for Olgierd, but he needs someone to do them for him. You must now travel to Olgierd and meet with Gaunter. 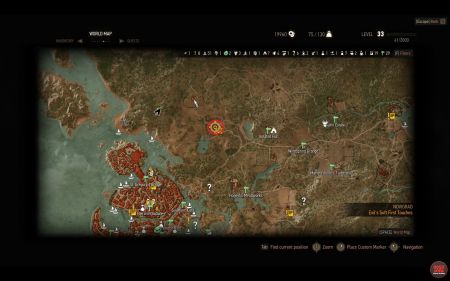 Click on the thumbnail to see the original image.
Location of the meeting place 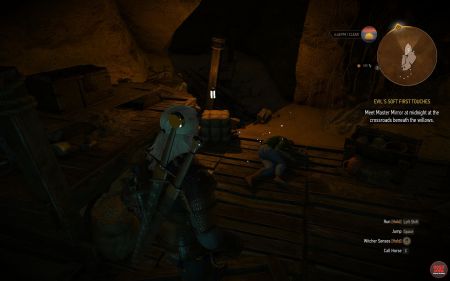 Click on the thumbnail to see the original image.
Loot the corpse to start the “Sword, Fame and Infamy” secondary quest.

Head back to Garin estate where you’ll see that the manor is burning. Two of Olgierd’s thugs are about to execute a man, the manor’s owner apparently, and you’ll have several options to choose from. The best one is to leave them to their grizzly business and then talk to Olgierd to finish the quest and get your reward.

A lengthy cut scene will now start, revealing the story behind the prince-turned-toad, along with the first two “wishes” that Olgierd wants you to fulfill.

NEXT POSTHearts of Stone Gwent Cards | The Witcher 3