The Witcher 3 net-gen update has finally arrived after several delays. And while it packs an exciting amount of new content and improvements, it has also brought quite a few issues. Hopefully, the problems will be eventually stamped out, but the good things will remain. Like Kal, the Dog, inspired by Henry Cavill’s actual dog from real life. In this guide, we pinpoint the exact location where to find Henry Cavill’s dog Kal in The Witcher 3 next-gen update. 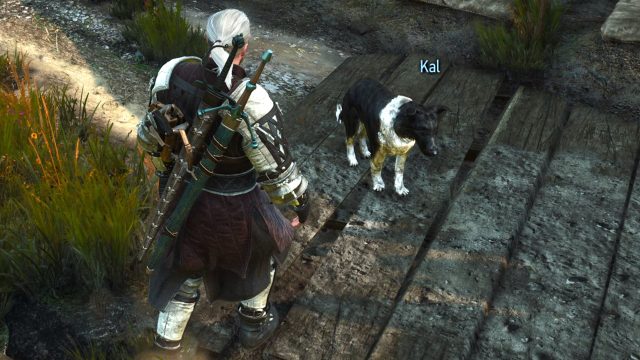 The beloved Hollywood star, Henry Cavill, will unfortunately no longer play Geralt of Rivia in Netflix’s The Witcher show after the third season. Everyone universally agrees that he was carrying the show with passion and love for the Witcher universe. As a sign of respect for Henry and how he played his role, developers at CD Projekt RED have decided to make a little easter egg. Namely, the new update has added some quests and costumes based on Netflix’s The Witcher. This includes a new side quest, “In The Eternal Fire’s Shadow, in Velen”, with rewards inspired by Netflix’s The Witcher series.

While most of these rewards are purely cosmetic, there’s one “emotional” as well – Henry Cavill’s dog Kal! So, where to find this cute doggie? It’s pretty simple – you must complete the “In The Eternal Fire’s Shadow” quest in Velen. However, you will need to get one of the “good endings” here. We will not spoil things for you; remember that it must be a good ending. Once that’s done, Henry Cavill’s dog Kal will appear in the Devil’s pit area. That’s a large abandoned quarry located east of the village of Mulbrydale. The dog will not appear immediately after the quest. Instead, he will settle there several days after the quest is completed.

NEXT POSTHow to Get Scatterbug in Pokemon GO