Vitis is a relic steel sword in The Witcher 3, added in the Blood and Wine expansion. It’s a rapier made for level 53 characters that increases the intensity of all signs. You can get it during the quest Beyond Hill & Dale and it’s easy to miss. In this guide, we’re going to show you where to find Vitis Steel Sword in Witcher 3.

If you choose to go after Syanna in The Night of Long Fangs, you’ll end up in an imaginary place called Land of A Thousand Fables. It is in this giant illusion that you’ll find this amazing sword. When you see a lone tower rising into the sky, head towards it. It’s the one where the Longlocks boss is located.

When you get near it, head for the southern side. Look for a small pond by the lake shore. There will be a corpse between the two bodies of water, with a glowing rapier next to it. That rapier is Vitis, and the body is dressed in Toussaint Armor.

Keep in mind – if you miss it and leave fairy land, you won’t be able to come back and get it. This area cannot be revisited once you leave.

Vitis is a level 53 relic steel sword. It does 418-512 damage, which is more than enough, but it also increases the intensity of all five signs by 20%. It has three rune slots so you can further enhance it. It’s a great choice for sign builds – it fortifies your magic skills while giving you a strong blade as well. 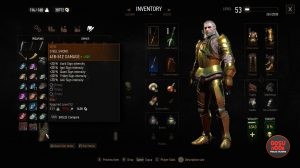