Assassin’s Creed Odyssey legendary armor sets are the best outfits in the game. They’re all golden quality equipment, and each one offers a set bonus – a new engraving perk that is active when you equip all the pieces. There is around a dozen of them, and they’re pretty difficult to obtain. Most of them are obtained in the second half of the game. In this guide, we’re going to show you a list of all Assassin’s Creed Odyssey legendary armor sets, which set bonuses they offer, what they look like and how to get them.

Obviously, there are a lot of story spoilers in here, so proceed with caution. You have been warned. 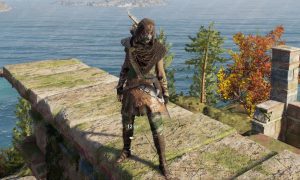 The Snake Set armor is all about doing poison damage, as the name suggests. The different parts (Noxious Boots, Venom Gloves, Slithering Belt, Scaled Torso) all do different things to enhance your poison attacks. The set consists of a lot of rough cloth, various teeth and a snake skin mask.

– Obtaining the entire set unlocks the Snake set bonus engraving: +10% intoxicated damage and weakening effect
– How to get Snake set in AC Odyssey: You’ll get a piece each time you defeat a culstist from the Eye of Kosmos branch
– If you want more info on the set, you should check out our Snake set legendary armor guide. 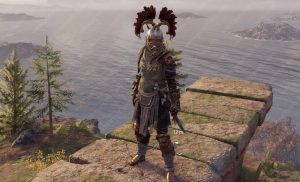 The Agamemnon Set is focused on fire damage. It bears the name of the legendary Mycenaean king who fought against the Trojans in the famous war. It’s an ornate set with a golden pauldron which bears the king’s face, a chestplate with motifs from the Trojan war, and a terrifying helmet with two giant plumes. All of the parts will make your fire attacks more efficient.

– Collecting all set pieces unlocks Agamemnon Set Bonus Engraving: +50% Burning Rate
– How to get Agamemnon Set in Assassin’s Creed Odyssey? You need to defeat each cultist in the Silver Vein arm of the cultists page to get a set piece.
– More information on each set piece and their bonuses and levels can be found in our Agamemnon Set Legendary Armor guide. 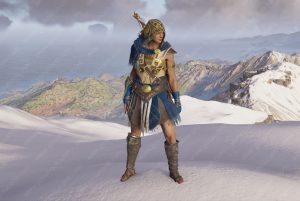 The Athenian War Hero Set is one of the two sets based on the warring factions of ancient Greece. The set combines blue, white and gold, and comes with a blue hood with golden ornaments. Each piece will increase the damage you do to Spartan warriors. 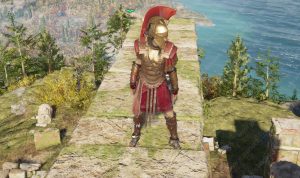 The Spartan War Hero Set is practically the antithesis to the previous one – each piece of the set will increase the damage you do to Athenian warriors. This makes it perfect for any warrior build, especially if you’re choosing Sparta’s side in the conflict. The set consists of shiny plate armor with red cloth to break the monotony, and a large red plume on the helmet.

– When you get the whole thing, you’ll unlock the Spartan War Hero set bonus engraving: +15% warrior damage
– How to get Spartan War Hero legendary armor in Assassin’s Creed Odyssey? In order to unlock it, you’ll have to defeat the Peloponessian League cult branch
– If you’re interested in a more in-depth showcase, head on over to our Spartan War Hero set guide 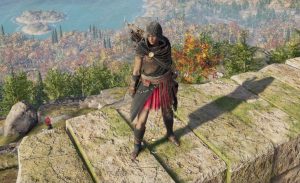 The Pirate Set looks like someone took Ezio’s black costume, wore it for 20 years while working in the coal mines and never once washed it. It will make you look like homeless Ezio, but it will also give you greatly enhanced assassin abilities. It’s good if you’re into that kind of thing – surprise attacks, backstabbing and such.

– Once you’ve collected the whole set, you’ll get the Pirate set bonus engraving, which gives you +15% assassin damage.
– How to get Pirate set in AC Odyssey? You can acquire this set by defeating the God of the Aegean Sea cult branch – one piece per cultist
– If you want a more detailed breakdown of what it does, head on over to our Pirate set legendary armor guide. 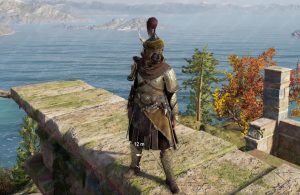 The Immortal Set looks like the game’s take on Persian armor from the period. The helmet has a dark brown plume, a turban and a black grimace mask. When you equip all the pieces, you’ll get an ability that helps you survive tough situations. It has a two minute cooldown, but it will most definitely get you out of certain tight spots you otherwise wouldn’t survive.

– Getting all five pieces will unlock the Immortal set bonus engraving, which gives you the ability to to restore 20% health on death
– How to get Immortal set in AC Odyssey? You’ll need to cross swords with the Worshippers of the Bloodline, one of the branches of the Cult of Kosmos
– If you’re interested to know more about this peculiar outfit, follow the yellow brick road to our Immortal set legendary armor guide. 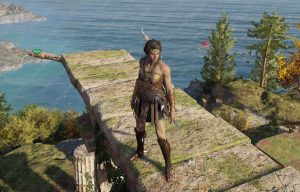 The Amazon Set is only available to Kassandra, while the Achilles set is exclusive to Alexions. They both have the same stats, so there’s no loss for either side. They have a pretty amazing set bonus that heals you when you do damage. The pieces themselves will increase your overall health, improve your regenerative abilities and such.

– When you’ve completed the collection, you’ll get the Amazon/Achilles set bonus engraving, which returns 2% of damage dealt as health
– How to get Achilles/Amazon set in AC Odyssey? The pieces of this outfit are owned by cultists from the Heroes of The Cult branch – kill them and you’ll get the gear
– For more details about what each piece of the set does, head on over to our Amazon & Achilles legendary armor set guide. 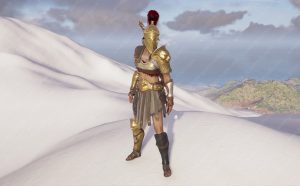 The Arena Fighter’s Set is obtained by powering through the arena questline, which begins when you get the invitation to the arena from the first mercenary bounty hunter you slay. Once you’ve completed it, you’ll get an outfit that makes you look like a gladiator, and gives you a bunch of cool bonuses. 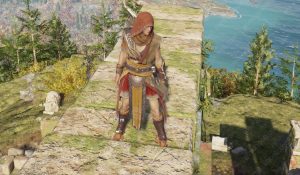 The Artemis set comes in earthly tones, and it’s dedicated to the goddess of hunt. As you’d expect, it will make you more proficient with a bow and arrow. Each of the pieces offers some kind of cool archery related bonus.

– When you have all the pieces, you’ll get the Artemis set bonus engraving: +15% hunter damage
– How to get Artemis set in AC Odyssey? You’ll need to kill several legendary beasts in the Daughters of Artemis quest
– If you want to know which beasts you need to hunt, or where to start the quest, you should read our Artemis set legendary armor guide 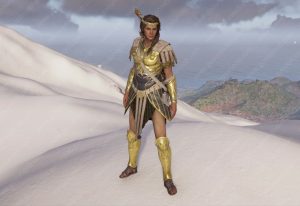 The Demigod Set will increase your offensive capabilities greatly. There’s an elven vibe to the outfit – it even comes with a tiara. If you’re into a specific play style, it might not help you much, but if you’ve leveled up all three skill trees equally, it will come in handy.

– When you complete the outfit, you’ll get the Demigod set bonus engraving: +10% damage with all abilities
– How to get Demigod set in Assassin’s Creed Odyssey? You’ll get four pieces from the family main story branch, while the fifth comes from the final cult leader
– If you want to see their stats or learn more about the armor, check out our Demigod set legendary armor guide. 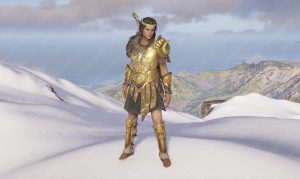 The Greek Heroes set makes the wearer much harder to kill. When it comes to looks, it’s like a souped-up version of the previous one – you’ll get a fur shoulder cloak and some golden ram horns all around. It’s also one of the hardest sets to unlock.

– When you collect all the pieces, you’ll get the Greek Heroes set bonus engraving, which gives +20% to all resistances
– How to obtain Greek Heroes set in Assassin’s Creed Odyssey? You’ll need to kill legendary mercenaries to get it
– If you’re interested in precise stats or how to find out which mercs are legendary, check out our Greek Heroes Set legendary armor guide 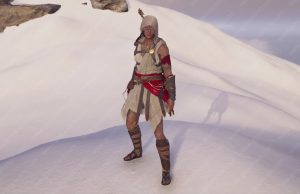 Another homeless Ezio costume, the Pilgrim’s set will make you look like Ezio if he had been living under a bridge for 20 years. It’s a riff on his classic white outfit, and it looks pretty ragged. It will make you a better assassin, by helping you stay invisible.

– When you’ve unlocked it, you’ll get the Pilgrim’s set bonus engraving: -40% adrenaline used for Shadow of Nyx ability
– How to get Pilgrim’s Set in AC Odyssey? You’ll get it by opening legendary chests
– If you want to take a closer look at it, our Pilgrim’s set legendary armor guide will show you all the stats and what the armor looks like