Wrath of the Druids is a huge expansion to Assassin’s Creed Valhalla set in Ireland and you’ll get a good chunk of content related to the Children of Danu Order, which has you collecting Bloody Ambers so you can get the Gae Bolg Mythical spear. Children of Danu are the equivalent of the Order of the Ancients from the base game, only for Ireland. They also have a supernatural side to them. Fantasy fans should enjoy hunting them. You’ll be getting Bloody Amber as you clean out the Children of Danu. This whole endeavor leads to getting the new best weapon in the game called Gae Bolg. If you want to find out all about Children of Danu Order, Bloody Amber and how to get the Gae Bolg Mythical Spear then keep reading. 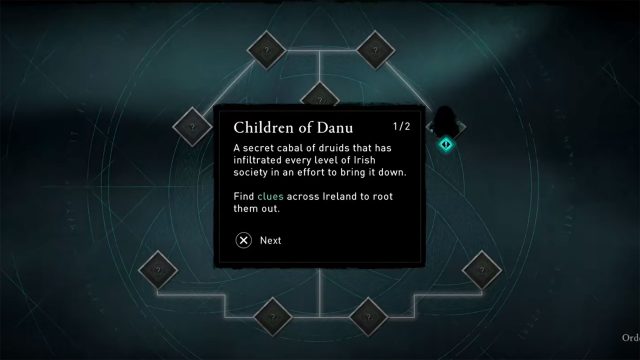 Just like Order of the Ancients in the base Assassin’s Creed Valhalla, children of Danu have their own menu section where you can see there’s ten of them you need to hunt. They are unlocked during Potion of Blood Wrath of the Druids DLC main quest in Ireland. Five of them are killed during the main story. For the other five you will need to collect three clues each to reveal their exact location. Some of them move around just like zealots did and is helpful to find clues about them. After you’ve killed them all you’ll get the Dawn of the Druids achievement / trophy.

Getting the first five members through the main story quest of the Wrath of the Druids DLC unlocks some of the clues for the remaining five. The Spider is found by winning the drinking mini-game in Dublin and finding a note on a bench next to the 50 delicacies altar in Dublin. She is then found in the town and easily disposed of. The Ash clues are found near Treasure Hoard Map icon between lakes Lough Tuam and Lough Rea in Connacht. Second clue is found inside a tent at highpoint Kiltober. He is tracked to a cave underneath Kesh Corann. One of the Whisper clues is found on top of Boyne Tombs in Meath and on a table found in a ritual site south of Kells Abbey. She is one of the mobile members of the order so get your clues before you attempt finding her.

You have to visit Ulster for The Blaze and The Mist. Blaze’s second clue is in the graveyard next to a waterfall found at Bally na Gall in southeast Ulster. Next one is in the only intact house in a burned down village found in the location marked on the map bellow. Blaze is in the same village where you found the last clue, where he, apparently, practices his fire techniques. The Mist clue is north of the big lake in Ulster. You’ll find it inside a stone circle in Doon Daven. Next Mist clue is on the shoreline northeast of Dysert highpoint in a boat. This will lead you to a small island called Doon Fort in northwestern Ulster. 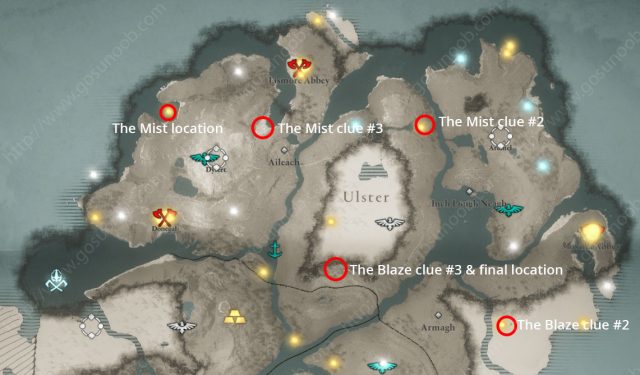 How to use Bloody Amber in Wrath of the Druids DLC

You will get Bloody Amber each time you dispose of one of the Children of Danu Order members. They are like Order of the Ancients medallions you used to bring to Hytham to unlock new abilities. You will need to bring Bloody Amber to Deirdre. Once you collect all ten the quest Amber Sun will tell you to go back to Deidrie’s Hut. Turn the amber to her and she will reward you with the Mythic spear Gae Bolg.

As we’ve already established Gae Bolg is a mythical spear you will get as a reward for hunting down all ten members of the Children of Danu Order and completing the Amber Sun quest. This arguably the new best weapon in the game. It’s special perk is that lightning shocks the enemy after 3 consecutive hits. 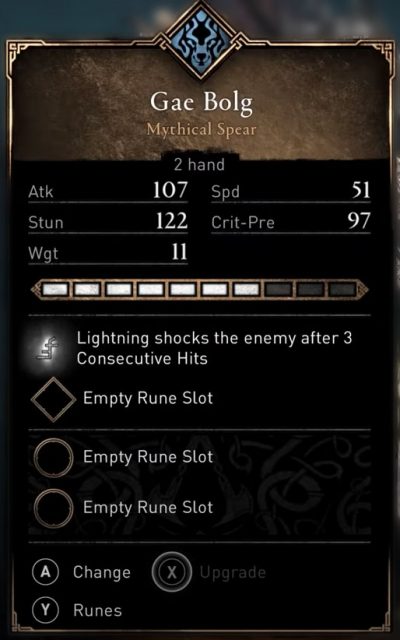