Chipping Away is one of the main quests in Assassin’s Creed Valhalla. It’s the one where you have to weaken Eadwyn’s hold on Oxenefordscire. You do this by running around the area, destroying supply carts and helping fyrds, warriors in need. There’s a bar you need to fill up – doing enough of these tasks will fill it, and you’ll be able to proceed. If you’re wondering where exactly to find them, our AC Valhalla Chipping Away guide will show you.

There are six of these locations around Oxenefordscire. Each supply cart will fill up around 15-20% of the bar, while helping a fyrd gives you around 20-25%. Completing four or five should be enough to complete the objective, no matter which ones you pick. Here’s a map showing the locations we found: 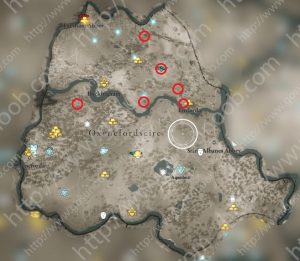 The carts are the easier ones, obviously – all you have to do is shoot an arrow at the red clay pot in the cart, and it’ll blow up. Helping the fyrds isn’t that difficult either, it just takes a bit longer. Keep an eye on that bar after completing each task – if it doesn’t fill up, make sure you restart the game. If that doesn’t help, you’ll probably want to reload an earlier save.

Once you’ve filled the bar, you’ll get a new objective – to reach Buckingham’s longhouse. Some players are reporting being unable to enter the hall, even though that’s where they’re supposed to go. If this happens to you, restarting the game should clear it up.

Most of the bugs in the game can be solved this way. The exception are the more serious ones, like the Unwelcome bug, that prevents you from playing the game entirely.