Choosing to give a dignified execution, brutal death or display of cruelty is one of the first choices you’ll have to make in the new Wrath of the Druids DLC for Assassin’s Creed Valhalla. It happens during the Snaring Thorstein quest. You get sent on this quest immediately after arriving to Dublin and getting some back story with your cousin Barid. Thorstein is BArid’s rival and Eivor hatches a plan to help his cousin. We’ll explain the consequence of choosing either of dignified execution, brutal death or display of cruelty choices, so you can decide whether you made a mistake and must load a previous save. 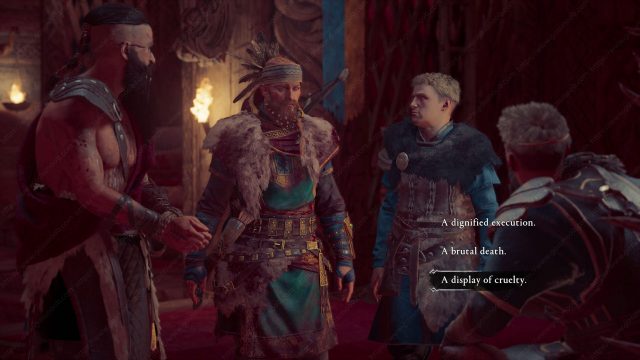 After you talk to Sichfrith he will send you to Ama from whom you steal Thorstein’s hideout key. You’ll find him in a cave under Dubgail Landing in Dublin. After defeating him and his guards you take him to Barid and choose his fate. If you decide to give him a dignified execution Eivor will argue that as a just and resolute king Barid must organize a stately and dignified execution. Barid, however, decides that Thorstein’s land and silver are confiscated by Dublin and he is banished forevermore. He does this because the king is a Christian and he wants to show Christian mercy.

The second choice you can make has Eivor calling for a brutal death of Thorstein. Barid ignores this advice as well. The only difference between this choice and the dignified execution one is in the first sentence Eivor says. Barid really wants to make Flann Sinna happy and hopes his mercy will cement his position in Dublin. 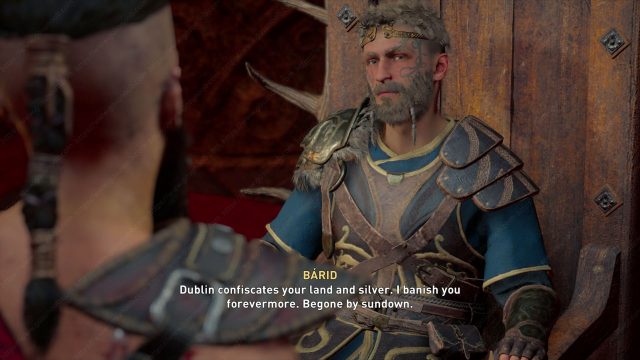 When you choose display of cruelty Eivor will argue that people delight in public spectacle. Torture is mentioned and Sichfrith approves, but yet again Barid doesn’t want a blood feud lasting generations and the dialogue continues as if you didn’t make a choice at all. Unfortunately, it seems that the first quest choice you make in the Wrath of the Druids DLC for Assassin’s Creed Valhalla is a frivolous one. What you really should be doing is building trade routes and hunting for armor sets because Snaring Thorstein choice is non-consequential. You can check out our video guide of this choice on our Youtube channel.