Fiery Ambush is one of the quests in Assassin’s Creed Valhalla. It’s one of the Oxenefordscire quests, in which you’re supposed to find Fulke and help her set up an ambush for a bunch of soldiers. There’s a merchant you’ll have to convince to help you, but first you’ll have to find Fulke – that’s where most people get stuck. She’s not marked on the map, and the instructions are kinda vague. This guide will help you complete AC Valhalla Fiery Ambush quest by showing you where to find Fulke at Eatun Barn.

Where to find Fulke at Eatun Barn?

The clues are as follows. She’s at Eatun Barn, in the west of Oxenefordscire. The place can be found south of Leah Villa Garrison, and it’s southeast of a large pond. It’s pretty detailed, as far as explanations go, but it’s still not enough for many. Here’s the place in question: 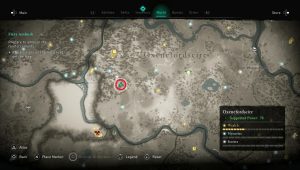 Once you get there, look for Fulke in front of the house. She’ll be talking to the merchant, trying to goad him into selling her his goods. If the supply carts with the oil pots are marked for you, then get off the road there – the house is just past them.

After you’ve talked to her, you’ll have to put the oil pots from the carts onto the road. Try to place them on the hay, that way the resulting conflagration will be greater. The game won’t wait for you to complete the task – your victims will arrive even if you haven’t set up the trap, so don’t dally. Put the pots around strategically, then climb up a tree or a cliff, so you can shoot them when the opposing army is in range. The explosion should take out most of them, but you may have to deal with the stragglers.