The Great Scattered Army is a quest in Assassin’s Creed Valhalla. It’s the first part of the Song of Soma arc, and in it, you’ll have to find the Summer Army’s leaders, then proceed to figure out the location of Soma’s longship, and finally find Soma herself in the swamp. The problem is, the map markers pointing you towards your objectives aren’t well placed, so it’s easy to get stuck. If you’re having trouble with any of the steps of the AC Valhalla Great Scattered Army quest, this guide will help you.

Find and speak to the Summer Army’s leaders

The first step of the quest will have you looking for the Summer Army’s leaders, who should be camped north of Grantebridge, at some ruins across the river. The map marker will point slightly to the southeast of the ruins. When you reach the place, you’ll see there’s nobody there. 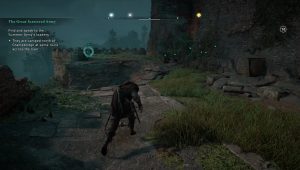 The description is right, the marker is wrong. The army is camped in Duroliponte, and you’ll find their leader on a terrace on the southeastern side, overlooking the place where the marker is pointing.

After talking to him, you’ll have to find Soma’s longship. Luckily, that one’s exactly where the marker says it’ll be. It’s beached, so don’t go looking for it in the water. After you defeat the Saxons there and free the captured warriors, you’ll have to look for Soma herself.

Find and speak to Soma

Talking to one of the captured warriors reveals Soma left east, into the swamp, to pull the pursuers away from her men. You’ll find her in Middletun, tending to the wounded. Introduce yourself, and she’ll tell you all about how she lost control of the town, and who was to blame for it.