Grimes Graves is a cave system in Assassin’s Creed Valhalla. It’s one of the Treasure of Britain locations, which means it’s home to a mystery as well as some nice loot. There’s a locked door deep within the cavern, and lots of players are unable to find the key that unlocks it. If you’re having trouble with this, or collecting the treasure in the caves, our AC Valhalla Grimes Graves guide will show you where to find the key and the treasure.

When you jump into the hole, go forward at first. Head left when you reach the chasm. When you’re past the part where you have to shimmy along a ledge, you should slide down and use the ladder to get to the platform above.

When you get to the chest, it will seem like you’ve hit a dead end. An Odin’s sight pulse reveals there’s something on the table with the vases, but you can’t interact with it. That’s because it’s inside one of the vases – smash them, and you’ll be able to retrieve it. 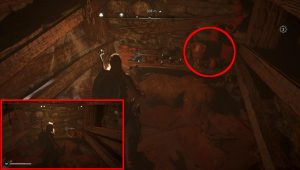 In the cursed area where you slide down and climb a ladder, there’s a locked door. Try as they might, most players haven’t been able to find the key that opens it. That’s beause it only spawns when you come there during the Beowulf quest. It spawns on the altar near the ladder, but only when the quest sends you to Grimes Graves.

If you’re not seeing the quest and you’re supposed to have it, go to the store and try to download it manually. The game has the tendency of not downloading the DLC automatically, especially if you have the physical edition and have to enter the code to redeem it first.

PREVIOUS POSTAC Valhalla War Weary – Who gets the silver – Sciropescire