The newest DLC expansion for AC Valhalla – Siege of Paris, has been released, and you may be wondering how to start it. In this expansion, Eivor’s adventures will take them to Francia, where they will be able to participate in one of history’s most iconic events – the titular Viking Siege of Paris. We understand that you may be very anxious to get your hands on all of this new content as soon as possible, and to help you do just that, we’ve put together this How To Start Siege Of Paris DLC – AC Valhalla guide. Here, we will explain everything you need to do in order to start this DLC. 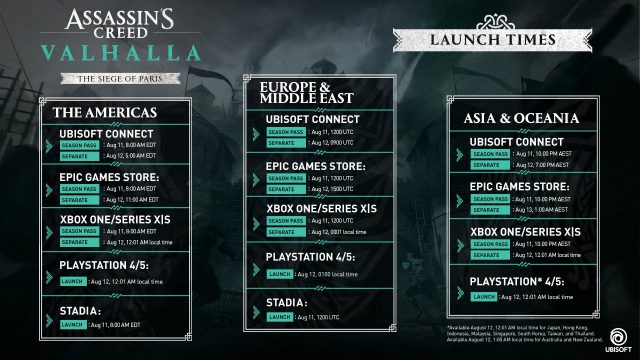 Many AC Valhalla fans reported that new Siege Of Paris DLC is not available for download on PS4, PS5 and Xbox. The first thing you have to check out is the official launch time for Americas, Europe, Middle East and Asia on all platforms. After that if you are a PS4 or PS5 user go to Store, than look for the DLC under Add-ons. For Xbox users you can start playing the game earlier if you change your zone to New Zealand time, then look under Microsoft Store -> Manage game and add-ons. Click where the game itself is, not updates, and scroll to the bottom (thanks Elevated_Aspects).

How To Start Siege Of Paris DLC

To be able to begin the Siege of Paris expansion, you will first need to have completed one of the first two story arcs in England – either Grantebridgescire or Ledecestrescire. These become available as soon as you have arrived there from Norway. Following that, you will receive a Letter From Randvi, informing you that two visitors from Francia have arrived at Ravensthorpe. This will then kick off the Strangers Bearing Gifts quest. A quest marker will guide you towards them. Once you get close enough to them, a cutscene will start. These two visitors from Francia are Toka and Pierre, and they will invite you to feast with them. Accept and begin the feast. Another cutscene will ensue, during which Toka and Pierre will invite Eivor to take part in the Siege of Paris. They will explain that they are opposing the new power that has arisen there – King Charles the Fat. Once he is done conquering their villages, they claim that Charles will invade England, thereby directly threatening Eivor as well.

After the cutscene ends, you will receive the To Francia quest. You now need to speak with Pierre. Speak with him and select the “I’m ready to travel to Francia” dialogue option. This marks the beginning of the Siege Of Paris DLC for Assassin’s Creed Valhalla.