Ostara festival is an upcoming event in Assassin’s Creed Valhalla. It’s a springtime event that’s going to see Ravensthorpe in bloom, with a bunch of festive activities and, presumably, festive rewards. Just the thought of Eivor with a laurel of tiny flowers on their head is enough to entice anyone into partaking. The developers have revealed when the Ostara festival starts, and have given just a bit of info about what awaits us in the village. 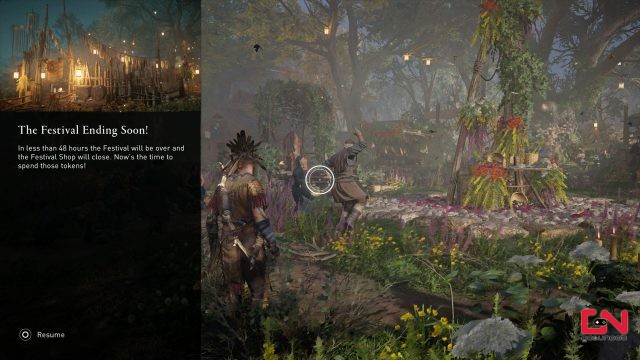 Assassin’s Creed Valhalla Ostara festival has begun with a strange message – Festival Ending Soon in a 48 Hours. Don’t worry, it’s just a little error, all quests will be available for the next 21 days.

The most interesting quest is Egg Hunt – The hunt is on and the eggs are hidden. For most of them you’ll need your vision. Six of them will get a clue. The other nine will be up to you. When all fifteen eggs you have found return them to Alwin safe and sound.

The devs have, in fact, been incredibly tight lipped when it comes to the Ostara festival. All we know is that it’s going to start on March 18th, and it’s going to feature a “bloomy Ravensthorpe”. They’re going to talk more about it in a first look article that’s going to be published on the same day as the festival itself, so that’s not of much use.

There are going to be unique activities – they’ve mentioned an egg hunt, but there’s bound to be more. What exactly could those activities be? Your guess is as good as mine. Definitely something to do with spring, so maybe some flower picking, watching a groundhog leave its burrow for the first time after a long winter’s slumber, or something like that. Hashtag just spring things.

What everyone’s more interested in are the rewards, naturally. Is there going to be a new outfit? Goddess of Spring Eivor with a daisy laurel atop his or her head? A white gown? Maybe even some new weapons? One can hope – there hasn’t been any mention of them, but the previous festival did have a new armor set tied to it.

We’re going to keep an eye on things, and if any more info appears before the festival starts, we’re going to update this article, so check back from time to time.