Rude Awakening is one of the quests in Assassin’s Creed Valhalla. It’s the mission in which you raid Notfall after discovering Kjotve’s spies in your camp. After you reach the village, you’ll have to find and burn several supply wagons. If you’re not used to the game’s systems yet, the locations of the wagons might be hard to discern. Setting them on fire without burning yourself might be even harder. That’s why we’ve decided to write this guide, to help you complete AC Valhalla Rude Awakening.

Where to find supply wagons?

There are four supply wagons in total. They’re wooden carts with sturdy roofs, filled with clay pots. You’ll find the first one by the pier when you disembark. The next one will be behind the tent in the field after the pier. The third cart can be found on the cliff above the village, and the fourth one is in the hills, by the cave entrance.

How to burn supply wagons?

The game will tell you to use a torch. Pull it out by selecting it from the weapon wheel, then aim with L2/LT, and throw it with R2/RT – just like using any other ranged weapon. However, what the game won’t tell you is that you can easily get caught up in the blast this way. A better way would be to use arrows. When you shoot the clay pots in the wagons, they’ll explode, and you can do it from a safe distance.

How to put out fire when you’re aflame?

In AC Valhalla you can put out the flames, if your character is burning, by doing a double dodge. This should be the game mechanic that we also saw in Odyssey. If you’ve caught on fire near the sea and have no stamina, you can try jumping into the water. Other than that, prevention is the best cure. Use arrows to burn the wagons, or if you’re using the torch, make sure you’re doing it from a distance. Also, don’t run into the area around the carts after you’ve set it on fire – there are flames you might not see there, so it’s easy to catch fire yourself. 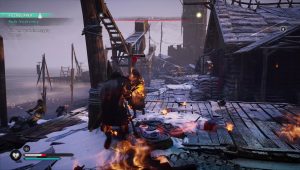 NEXT POSTDisabling Community Photos on Map in AC Valhalla