Seahenge is one of the standing stone puzzles in Assassin’s Creed Valhalla. It can be found in East Anglia, and in order to solve it, you’ll have to use Odin’s Sight to reveal the markings, then stand in a specific spot so that they piece together a full image. It may sound simple, but in reality, it’s harder than it sounds. If you’re having trouble with it, our AC Valhalla Seahenge standing stone puzzle solution guide will show you how to complete it.

Well, first you’ll need to find it. It’s in the northern part of East Anglia, where the Wensum river meets the sea. Interact with the stone in front of the big tree stump, and you’ll get a message about the origins of the standing stones, and the image of the pattern you’re looking for.

The location is near the edge of the formation, but it’s hard to describe in words. So here’s a picture of where we were standing when the solution was triggered. It’s about a quarter of a circle to the left (clockwise) from the stone. 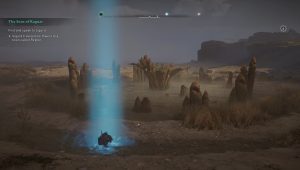 It might take a few tries to get it right – move a bit to the left or right if the message doesn’t pop up when you stand still for a few seconds. If you think the image isn’t enough, we’ve also prepared a video guide, which is probably the best way to figure it out. You’ll find it embedded below.

These standing stone puzzles can be fun at times, but they’re also often frustrating. It’s especially bad when there’s a low tolerance for errors and you have to be really precise. Even more so when your character is as nimble as a dump truck, like Eivor often seems to be.