Skills are passive and active abilities in Assassin’s Creed Valhalla. Unlike the previous games, where you had a clear and clean skill tree, this time there’s a messy web which only reveals itself slowly as you unlock more and more of them. If you have trouble wrapping your head around the concepts, this guide will show you all AC Valhalla skills, how to get skill points, how to reset skills and more.

How skills work in AC Valhalla?

When you start the game, you’ll see three skill groups, each belonging to a different tree – Wolf, Bear and Raven. One favors stealth, one pure melee combat and one ranged attacks. When you unlock enough nodes around a skill, the game will reveal another one, one that’s connected to it.

As you invest points into each tree, more and more skills will become visible, showing you what’s going to be available down the line. Only the one with the big icons are actual skills; the small ones are stat boosts – a healt upgrade here, an attack increase there.

How to get skill points?

You can get skill points by earning experience, which is awarded for pretty much anything you do, like completing quests, winning fights, discovering synchronization points and exploring the map. Each cairn memory puzzle will give you one skill point, and killing a jormsviking or daughter of Lerion will give you two.

How to reset skills & respec in AC Valhalla?

You can reset all your skill by holding down square (X on Xbox) while in the skills menu, if you want to completely respec. If you’re not happy with just some of the choices you’ve made, you can reset individual skills by hovering over them and pressing the appropriate button. 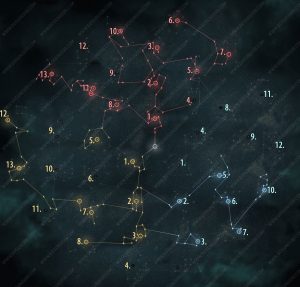