Spire of Stars rewards are items you can get from completing the new raid lair in Destiny 2. They include emotes, high powered legendary weapons and armor, and more. You’ll get most of them at the end of the lair, but some are obtained earlier. In this guide, we’re going to show you all Destiny 2 Spire of Stars raid lair rewards.

You’ll find the first Spire of Stars chest during the platforming section with the fan blades. It’s on the third fan axis. The second chest will appear when you clear the ship-shooting section, and the final one you’ll get when you defeat the boss and complete the raid lair.

After finishing the first trial, the one with the purple Greed orb and rising pillars, you’ll get the I’m Open emote. It looks like someone waiting to get a pass. The description says “Pass me the relic”, which will probably spark fond memories after the wounds from the new lair have healed.

The Emperor’s Envy is legendary fusion rifle with the Precision Frame intrinsic perk, which makes the recoil pattern more predictable. It also has the Rampage trait, which increases your damage as you score kills, up to thrice the original value. 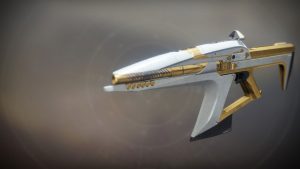 Last of The Legion legendary sidearm

This one’s a legendary sidearm. It has the Adaptive Frame perk, which grants it the ability to shoot a burst of three bullets. The Full Auto Trigger System trait allows it to shoot in full auto mode, when you hold down the trigger.

Hunters playing the Spire of Stars have a chance to get parts of the Equitis Shade armor. It increases recovery, health regeneration and resilience.

The Turris Shade legendary armor set is reserved for Titans who manage to beat the trials of the new raid lair. The perks give it increased mobility, recovery and health regeneration.

Finally, warlocks who perform well in the Spire of Stars will be rewarded with pieces of the Insigne Shade legendary armor. Those who wear it will get better mobility, resilience and health regeneration.