As it is a game with so many different choices you can make along the way, it’s no wonder that there are also several endings in Dying Light 2. However, to get the third ending, which is also the best ending, and a romance with Lawan, you will need to make a series of specific choices that span the entire game. Of course, it goes without saying that there will be massive spoilers ahead. If you are prepared for that, then our Dying Light 2 Romance Lawan Choices – The Best Game Ending guide will tell you all the decisions that you will need to make in DL2 in order to get this ending. 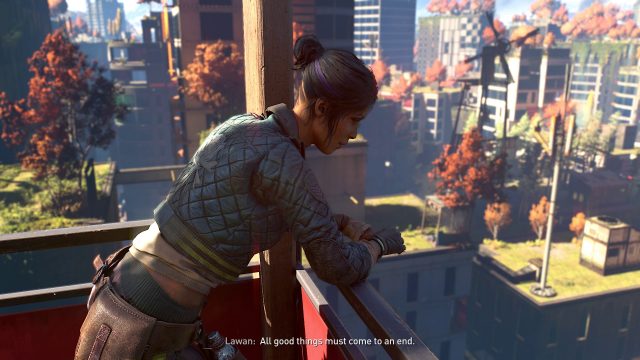 It’s all spoilers from now until the end of the article. Now, while this isn’t a romance in the traditional video game sense of the word – there are no displays of physical intimacy like in Mass Effect, for example – it’s strongly implied that Lawan (voiced by Rosario Dawson) and Aiden will get together after the game’s events. Let’s see what are the major choices that lead to this outcome. Firstly, it’s very important how you interact with Hakon. You should tell him the truth and be nice to him, promising to help him get to the ocean. Above all, you should help Hakon and not leave him to die.

Next, you have to give Frank control over the VNC Tower transmitter. When you confront Hakon during the Nightrunners main story quest, you need to tell him you don’t want to fight. Basically, you must save Hakon’s life, making choices along the way that will result in him surviving his confrontation with you and Lawan. As for Lawan, most of the choices that will lead to this best ending occur during the “Shoes” main story quest. When she brings up her shoes, tell her “They look fine, Lawan.” After that, once you are having the conversation at nighttime, choose to be empathetic. Select the “More likely the other way round”, ask about Hakon, ask about the poem, and, this is crucial, say that “Killing him won’t change the past.”

You will know if you have made all the right choices to get this best ending if Lawan shows up before you fight Hakon at the church. You can persuade her to spare Hakon by telling her “Hear me out, Lawan. Don’t do it”. This isn’t the end of choices you have to make. During the Epilogue you’ll have to save Frank from dying. You’ll need antidote for the poison from the herbalist. If you did the save Aitor side quest and chose wrong, the herbalist won’t be there. So, you had to have saved Aitor’s life as well. Finally, during your confrontation with the Colonel, depending on your choices, you should prevent Lawan from killing the Colonel

Finally, during the game’s finale, X13, once you have defeated Waltz, you will get one final decision to make. You can let Lawan sacrifice herself to save Mia or to help Lawan get out. If you have saved Hakon, choose to save Mia here. Hakon will save Lawan, while you save Mia. This will get you the best ending in the game, as Lawan will join you once you leave the city.

UPDATE: It is hard to determine exactly the choices you have to make to get this ending. There are slight variances in what everyone is saying about this. We believe to get the best ending for the game where Lawan survives and goes with you you have to try and save every major character in the game. Hakon, Aitor, Frank, Colonel and the city itself. No matter how you personally feel at a particular point of the story you have to try and not enact vengeance. Instead, refuse to be the judge and try and save everyone. Once again, the only way to know you succeeded is if Hakon survives and during X13 you choose to save Mia and Hakon saves Lawan.

NEXT POSTDying Light 2 New Game Plus